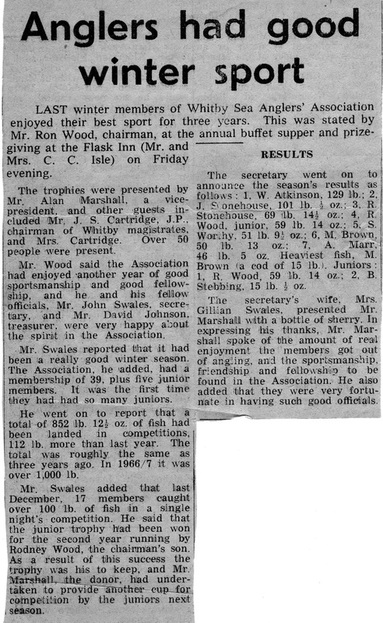 The trophies were presented by Mr. Alan Marshall, a vice-president, and other guests including Mr. JS Cartridge, JP chairman of Whitby Magistrates and Mrs. Cartridge.  Over 50 people were present.

Mr. Wood said the Association had enjoyed another year of good sportsmanship and good fellowship, and he and his fellow officials, Mr John Swales, secretary, and Mr. David Johnson, treasurer, were very happy about the spirit in the Association.

Mr. Swales reported that it had been a really good winter season.  The Association, he added, had a membership of 39, plus five junior members.  It was the first time they had had so many juniors.

Mr. Swales added that last December, 17 members caught over 100 lb of fish in a single night's fishing competition.  he said that the Junior trophy had been won for the second year running by Rodney Wood, the chairman's son.  As a result of this success the trophy was his to keep, and Mr. Marshall, the donor, had undertaken to provide another cup for competition by the juniors next season.

The secretary went on to announce the season's results as follows:

The secretary'e wife, Mrs. Gillian Swales, presented Mr. Marshall with a bottle of sherry.  In expressing his thanks, Mr. Marshall spoke of the amount of real enjoyment the members got out of angling, and the sportsmanship , friendship and fellowship to be found in the Association.  He also added they were very fortunate in having such good officials.

Courtesy of William Atkinson, Chairman of Whitby Sea Anglers Association, from his personal collection of press cuttings. Thanks also to the Whitby Gazette 30-04-1971. Posted 18/02/2013 PDH.