Total Number of fish - Whitby Sea Anglers Assoc. did not start recording fish numbers until 'The Peter Sutton Memorial Cup' for the Greatest Number of Fish was presented by Mr Alec Bain in 1985/86 Season.

*From the Whitby Gazette press cutting below.
**Seasons weights re-entered into an Excel spreadsheet.
Notes:-  PDH 14/12/2102 from ledger.

No mention of Christmas Match.

Started 29th Oct 2013 (finished 11th February 2014), proving problematical as there are no names for the start of the season, and doing reverse engineering using the top seven (as above & press cuttings) is not really helping.  Will need to research Whitby Gazette microfiche at Whitby library to cross reference names and weights, if and when reports were sent in for publication.  Therefore work still in progress.
Leader board at the end of Ocotber 1981 - after 8 of 47 matches
Leader board at the end of November 1981 - after 14 of 47 matches
Leader board at end of December after 21 of 47 matches. 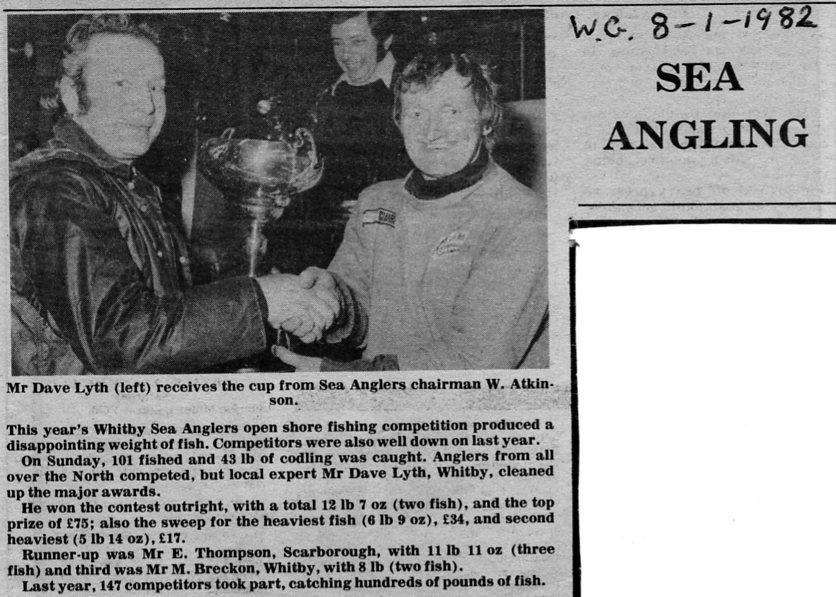 On Sunday (3rd January 1982*) 101 fished and 43 lb of codling was caught.  Anglers from all over the North competed, but local expert Mr Dave Lyth, Whitby, cleaned up all the major awards.