​Tonight is our 61st Annual Presentation evening, I hope everyone enjoyed their meal, and thank you all for coming.

Start of the season, just one match in September and Bernard Vasey is feeling unwell, ignored stomach cramps and went fishing.  Returning with 2 codlings for 5 lb 03 oz.  Sadly Dave missed the weigh-in when he was in collision with an adult deer on the Scarborough road.

October was Matthew’s month and saw the Singles knockouts get off to a good start.  Matthew 4 fish for 10 lb in the first round, and in the Doubles Knockouts Matthew 8 fish 21 lb 14 oz.  Matthew claimed the month with 33 fish for 87 lb 02 oz with Rob 27 lb in arrears.  Wednesday 7th Oct and Mathew weighs-in the Heaviest Bag of the season 30 lb 09 oz, that night would be the best weigh-in of the season 156 lb 05 oz from 20 members.  Sunday 25th Oct and a WSAA record broken twice, 1st Paul Short, with a pollock of 6 lb 05 oz.  Short lived though, no pun intended, as Denis weighed the Heaviest Fish of the night, a 9 lb pollock, the new WSAA record.  Following Wednesday and Andrew weighs a fine spragg 7 lb 05½ oz.  October was to be the best month of the season 325 fish for 589 lb 06 oz.

December had the 4th best weigh-in and the highest fish count 458 for the season, of which 315 were whiting.  It was Ben’s month 58 fish for 53 lb 03 oz only 8 lb ahead of Dave.  Another record, this time from new member Mike Saunders, a thornback ray 5 lb 08 oz.  Taking the record from Malcolm, which he had set in 2003 - 1 lb 09 oz.  Sunday 13th December and Andrew shares 1st Place in the Cloughton Open with Pete Dunn with identical fish of 8 lb 02 oz 2 drm.  Well done Andrew.  9th December, Colin & Malcolm were crowned Doubles Knockout champs beating Dave & Mick.

Over the Christmas break, The Station Inn Open & Andrew was 3rd with a spragg of 8 lb 04 oz.

January, 1st Wednesday, James is crowned Singles Knockout champ beating Andrew, both with 3 fish 12 lb 03 oz - V - 9 lb 10 oz.  Another record, Most Fish caught in any one match 35 fish - 32 whitings and 3 flat fish from Malcolm.  Beating Phil Mead’s previous record of 36 whitings for 14 lb 13 oz.
Bell Trophy Sunday 24th and 13 members attended, we came a respectful 2nd 8 fish for 15 lb 13 oz 02 drm.  Our hosts for the day, Scarborough Rock Anglers were awarded the ‘wooden spoon’ from their secretary George Dunn.
Saturday 30th and Chris is pleasure fishing and weighs-in the Heaviest Fish out of Competition 9 lb 07 oz, being the first recipient of the new David ‘Sten’ Stonehouse Memorial Sandsend Trophy & £50.  Well done Chris, how long before you are classed as a senior?

February saw the revival of an ‘old grudge’ match, Cloughton Rock Anglers - V - WSAA, sadly true to tradition as hosts we lost the match.  Our average of 12½ oz could not match theirs 1 lb 09 oz.
February 224 fish for 312 lb 09 oz, was Rob’s month 14 fish for 42 lb 07 oz.  Wednesday 10th and Storm Imogen had past, Ben weighs the Heaviest Bag 17 lb 09 oz.  Only 2 fish mind, to take Heaviest Fish of the season 12 lb 08 oz.  Well done Ben, sadly on the same night our Chairman, & President, William reported dropping a good fish when he tried to lift it, estimated at 8 lb.

Most consistent member with 41 weigh-ins from 51 matches was myself Peter Horbury.

Well done to WSAA Team B in the Yorkshire Fours, crowned champions for the 2nd year in a row.

Many thanks to all members for your input, photographs and tales.

Thanks to Bernard & James for their work, at the Open & weigh-ins (and banter).

Many thanks to Dave for the book work and keeping everyone in order.

In reverse order we will present the prizes & trophies

Couple of 'out take' photographs.
Most Memorable Moment contenders 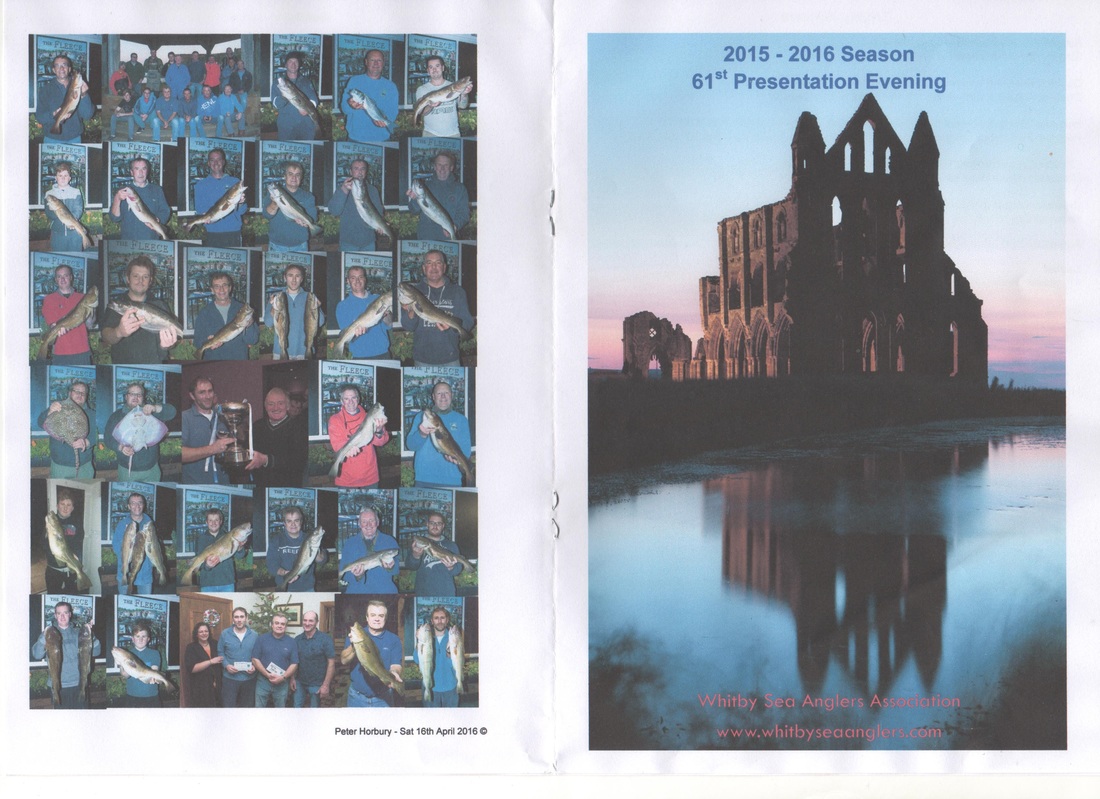 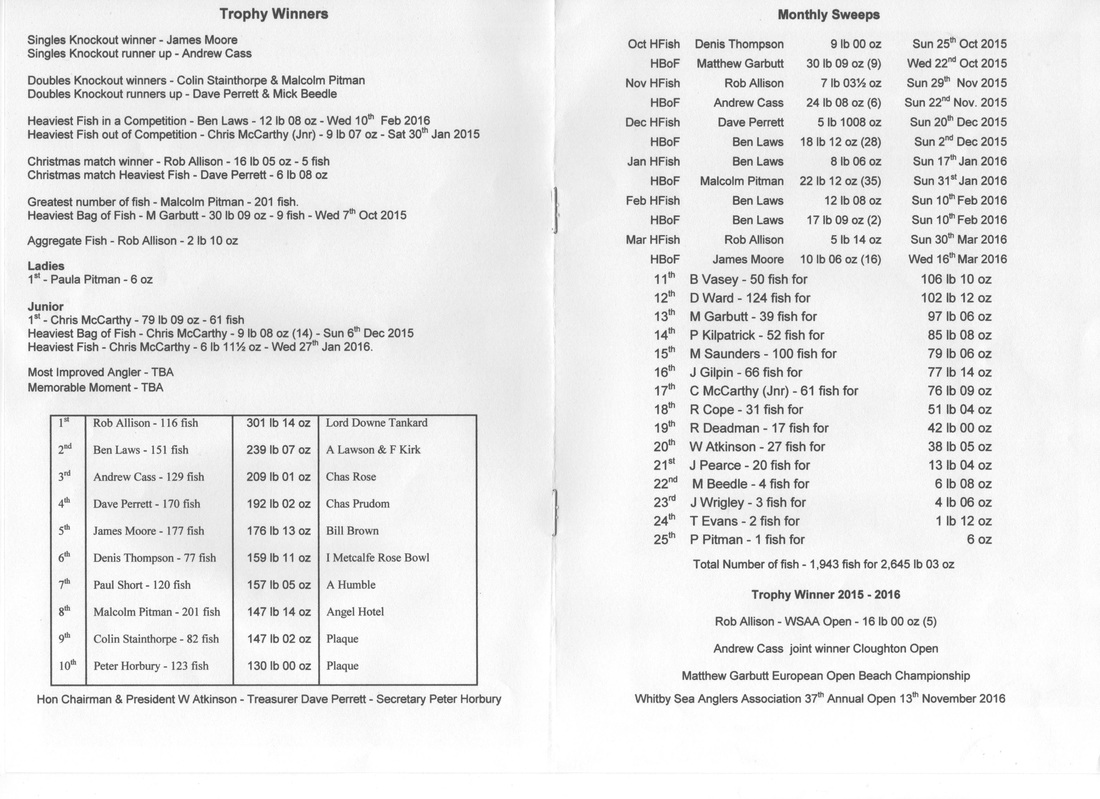 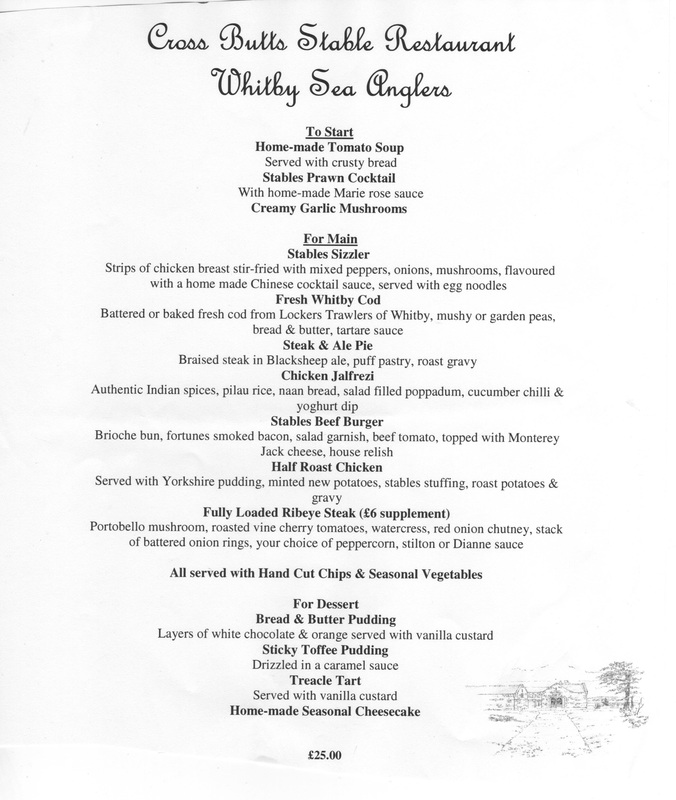