As reported by Bernard Vasey to the Whitby Gazette.
Original edit 19/01/2013 PDH.

The night match was fished under the worst conditions this season, snow showers and a strong wind from the north east kept catches low.  The sea was surging under an ebbing tide with loose weed in the runs which kept the larger fish in deeper water.  Six anglers returned with fish.
This was also a Federation Knockout Match between Whitby A and Whitby B teams and Whitby A went through 9 lb 00 oz and 8 lb 01 oz.
Bernard Vasey
22 lb 06 oz - 12 fish [ 18 fished]

This was a day match fishing 10am to 4pm and weigh in by 5pm at the Red Lion, Cloughton, where a hot meal was provided after the prize presentation which was made by Councillor TW miller. 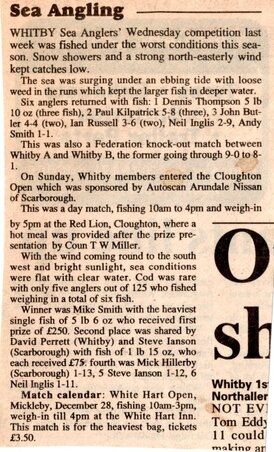 This was also a Federation knock-out match between Whitby A and Whitby B, the former going through 9 lb 00 oz to 8 lb 01 oz.

On Sunday, Whitby members entered the Cloughton Open with was sponsored by Autoscan Arundale Nissan of Scarborough.

This was a day match , fishing 10am to 4pm and weigh-in by 5pm at the Red Lion, Cloughton, where a hot meal was provided after the prize presentation by Coun TW Miller.

With the wind coming round to the South west and bright sunlight, sea conditions were flat with clear water.  Cod was rare with only five anglers out of 125 who fished weighing-in a total of six fish.
Winner was Mike Smith with the heaviest single fish of 5 lb 06 oz who received first prize of £250.

This was the Christmas Match Competition for club members only, fishing times 2pm to 7pm.  The conditions were far from perfect, even with an easterly swell the water was very clear.  Catches were made when darkness fell with only 8 anglers weighing in a total of 12 fish as 29 fished.
The winner of the heaviest bag of fish went to
The heaviest fish went to Bernard Vasey 2 lb 04 oz.
Members would like to thank Robbie and Dave for the excellent Christmas meal which was enjoyed by all at the Pier Inn.
Bernard Vasey
Christmas match
17 lb 12 oz - 12 fish [ 25 fished]
Match calendar.
Ship Inn Open, 14th January 1996 - Incorporating the Whitby Gazette Trophy.
£250 First Prize.
Bernard Vasey

Whitby Sea Anglers returned to club fishing after the Christmas new year break to good conditions from a south easterly sea which produced fish for 15 out of the 18 members who fished.  The best bag came from William Atkinson - 18 lb 05 oz -  fish, including one of 9 lb 00 oz.  This bag of fish took him over the 100 lb barrier for the season to date.

With the rough south easterly sea conditions continuing it did not produce the fish until the tide ebbed, leaving loose weed high on the scars.
Catching his first near the end of the match Neil Inglis had the top bag for 12 lb 02 oz, one fish was 7 lb.
Bernard Vasey
47 lb 05 oz - 17 fish [ 18 fished]
Match calendar.
Ship Inn Open 14th January 1996
Bernard Vasey

Bell Trophy
As reported to the Whitby Gazette by Bernard Vasey.

All recognised Sea Angling Societies may compete for this Trophy and takes place from the shore, from Coble landing, (Filey) to Argyle Gull (Hayburn Wyke) by invitation only.

Nine Angling Clubs took part, which consisted of 'no less than' 8 members per team.  The trophy winners to be determined by the highest average weight, per competitor.

The fish were scarce even with an east / south easterly running, 14 fish were weighed in, with over 100 taking part.

Snow blizzards on Friday and Saturday almost cancelled Sunday’s match, road were clear by Sunday morning due to gritting and a thaw Saturday evening.  The cold easterly winds continued and with it the fish scarce, although 7 members did weigh in 10 fish.
Denis Thompson - 7 lb 06 oz - 1 fish (reported this was his only bite).
Bernard Vasey
22 lb 12 oz - 10 fish [ 19 fished]

The easterly cold conditions remain unchanged and with it the scars and beaches are quiet with very few fish showing along the east coast.  Although it was nice to hear a 21 lb 14 oz cod was landed from the Marine Drive at Scarborough by Cloughton angler Mick Chadwick on Sunday night 28th January.
This is time of year for big cod which come close to shore to spawn, but unless conditions change to a north westerly blow these specimens will be rare.
Bernard vasey
16 lb 05 oz - 7 fish [ 21 fished]
Leader board after 34 of 51 matches - last column +/- 5lb per match target [170 lb] {edit 02/02/2021}
Season total 685 fish - 1,213 lb 06 oz - Av 1 lb 12 oz

With a big tide ebbing, anglers were able to reach the low water marks as the clear moonlit night revealed the scars.  Again small codling were on the scales as Ian Russell won the match.
Bernard Vasey
19 lb 08 oz - 12 fish [ 17 fished]

Still an easterly swell with plenty of colour in the water and a light chilly breeze produced fish from either side of Whitby. Sandsend and Robin Hoods Bay brought 11 fish to the weigh in station.
Bernard Vasey
28 lb 15 oz - 11 fish [ 19 fished]

The conditions were quite good for a Sunday match, a dry night and a flooding tide with long distance south easterly swell running.  But the fish were not taking the large baits of lugworm and mussel that were on offer.
At present 4 members are over the 100 lb weight for the season which concludes at the end of March.
William Atkinson - 142 lb 09 oz.
Ian Russell - 125 lb 10 oz.
Neil Inglis - 123 lb 11 oz.
Denis Thompson - 115 lb 01 oz.
Bernard Vasey
17 lb 02 oz - 7 fish [ 18 fished]

North Westerly’s Return.
With conditions at last changing to north westerly reports of anglers fishing the west pier on Tuesday night returned home with fish which had moved in close to feed on the food that had been churned up in the sea swell.
By Wednesday the swell had fallen away a little but conditions were still good with a medium flooding tide of 4.8 metres, catches were up on previous club night results.
Bernard Vasey
49 lb 05 oz - 19 fish [ 21 fished]

The worst conditions this season arrived for the start of Sunday nights match with strong north north easterly gales and snow blizzards, increasing as the evening drew on.  Unable to cast and fish the marks most anglers returned back early.  Dave Perrett was the lucky angler, as he was the only one to weigh in with a fish he caught on his first cast.
Bernard Vasey
2 lb 02 oz - 1 fish [ 17 fished]

The sea had become calm for Sunday nights event, starting to fish 2 hours before high tide, there was still plenty of colour in the water, but very few bites.  For the second match this season only one angler returned with fish to weigh in, Bernard Vasey landed a 1 lb 10 oz fish from ”The Top of The World” Sandsend Cliffs, with a cocktail of peeler and mussel.
Bernard Vasey
1 lb 10 oz - 1 fish [ 16 fished]

There was another poor result to the midweek match as the conditions were quite good with a northerly long distant swell running in.  Whitby Sea Anglers were expecting to hook into fish from the slow flooding tide which started one hour before the match started, but the swell was a little too heavy at times, and only 4 fish were brought to the scales.
Bernard Vasey
9 lb 01 oz - 4 fish [ 15 fished]
William Atkinson won the sweep for the heaviest fish of the month competition for February having a fish of 7 lb 12 oz on the 14th February.
Bernard Vasey
Leader board after 42 of 51 matches - last column +/- 5lb per match target [210 lb] {edit 02/02/2021}
Season total 750 fish - 1,369 lb 08 oz - Av 1 lb 13 oz

With his first weigh in for 15 matches Brian Harland won Sundays match with 5 fish for 12 lb 07 oz.  The sea state was fairly good with a north by north westerly light wind giving movement close in to shore on an ebbing tide.
Bernard Vasey
27 lb 01 oz - 11 fish [ 13 fished]

The mid-week match was yet another single fish weigh in, this time it was Paul Kilpatrick’s turn to be the victor, a codling of
2 lb 07 oz from the beaches near Sandsend.  With a big tide 5.6 metres ebbing tide and a south easterly swell the fish remained scarce on the scars.
Bernard Vasey
2 lb 07 oz - 1 fish [ 13 fished]

Sunday’s match was a little better, fishing a top of the tide ebb match which produced 5 fish to the scales.  There were 3 anglers reporting of “the one that got away”, better luck next time lads.
Bernard Vasey
10 lb 14 oz - 5 fish [ 17 fished]

The easterlys still continue to dominate along the east coast and with it the old saying of “when the winds are in the east the fish bite the least” has proved to be this season.  The north westerlys have been rare and the fish have not moved south in their normal winter cod run.
The mid-week match was spoiled by a strong north easterly cold wind and again some marks were not fishable.  For the first time this season the scales were not “hung out” as no fish were landed despite 12 members fishing.
Bernard Vasey

The sea swell was rough with no wind for the match, fishing an ebbing tide Brian Harland had a hard task when he hooked into the best fish in the club this season.  He was fishing in rocky ground when the 12 lb 10 oz cod took the cocktail of lugworm and mussel.  In his last cast he landed another codling, weighing in a total of 15 lb 08 oz.
Bernard Vasey
21 lb 03 oz - 4 fish [ 14 fished]

Denis Thompson triumphed in both, with a fish of 2 lb 03 oz on Wednesday, fishing on a flat calm night from an ebbing tide and a 2 lb 10 oz fish on Sunday.  Conditions were slightly better with a light south easterly stirring a little colour to the water.
Small fish bites were keeping the junior members active on the west pier extensions as undersized flat fish were returned to the water.
2 lb 03 oz - 1 fish [ 13 fished]

With the season almost at an end, the remaining club members who fish to the end will be glad when the last match is fished.  There were only 2 codling in 2 matches weighed-in.
2 lb 10 oz - 1 fish [ 11 fished]

Whitby Sea Anglers can now stow their gear as the 1995 - 1996 season came to an end.  The last match was fished on a dry cool night and a calming northerly swell with the tide ebbing allowing anglers to reach the tangles and low water marks.
Ian Russell produced the only fish to be weighed in, 3 codling for 7 lb 09 oz, winning the match and also putting him back in second place overall for the season.
The club will be holding their annual dinner and prize giving presentation at the Metropole Hotel on 20th April 1996.

Heaviest Fish of the Month 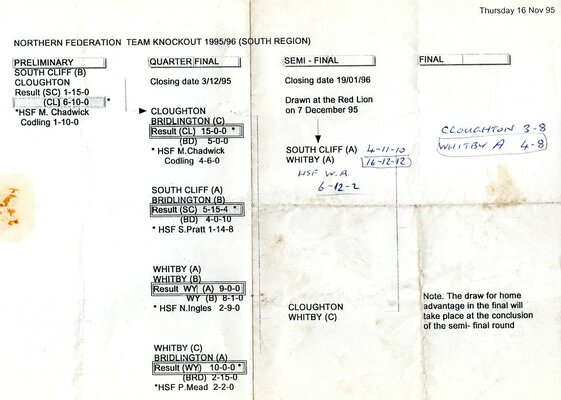