Preparation
Earlier in the afternoon Bernard Vasey, Dave Perrett and myself (Peter Horbury) set up the trophy table.
The Oak room, Dunsley Hall 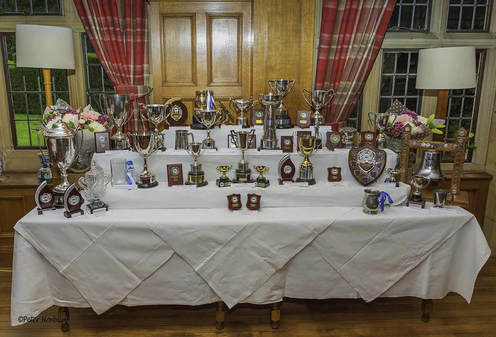 Bernard Vasey familiarising himself to the trophy order prior to assisting Chairman and President William Atkinson. 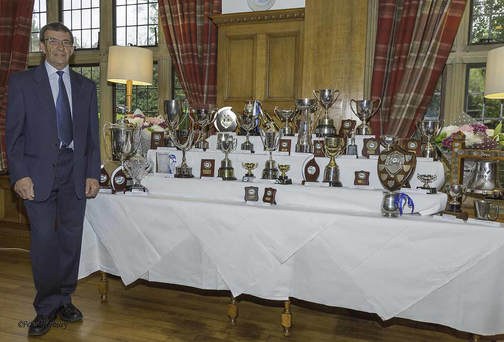 ​After an excellent meal Secretary Peter Horbury
began proceedings with a summary of the 2017 - 2018 Season
Good evening.  Many thanks to the staff here at Dunsley Hall I think you will all agree that was an excellent meal.

Behind the scenes there are some, who are often overlooked, who themselves make sacrifices for WSAA, and reading those previous presentation evening reports there were gifts not dissimilar to those already given.

Three ladies suffer, and put up with their husbands commitment to Whitby Sea Anglers who should not be overlooked.

First Jackie Vasey, secondly Jackie Perrett, and to my wife, Chris, (as a token of our appreciation, all were presented with a bunch of flowers, followed by a round of applause from members).

To our Chairman and President a token of our appreciation (William Atkinson was presented with a bottle of Port).

Just like last season the majority of matches had 20 or more members fishing.

The least being 9 members Wednesday 28th February - Beast from the East.

Storms included hurricane Lee, Irma, Ophelia, Brian, Eleanor in January, Georgia in February, Emma in March, and of course The Beast from the East Parts I, II & III.  And an SSW, Sudden Stratospheric Warming at the end of February.

Just like last season the top spot change so often during such a closely fished season, and of course the question,
who would be first to the 100 lb Club?

The fish count kept changing in the closing month of March.

Comradery again, as Bernard’s jokes, were at their best throughout, with the weigh-ins well attended but not so much the social side with many going home after the weigh-ins which we need to address.

As a suggestion Danny Middlemas has offered to organise the ‘domino cards’ next season.

Ben Laws is talking to Cloughton with reference to joining them in their casting competition.

September
Just the one match in September, and Stu Swales wins with the only double figure bag, 6 codlings 10 lb 02 oz.
And the first casualty, Mike left it too late & misses the weigh-in with 1 LSD.

February
February was Denis Thompson’s month 12 fish 29 lb 15 oz, this time Rob Allison was 5 lb adrift.
February started well for WSAA with another win, this time against Cloughton in the Secretary’s Challenge Trophy and thanks to all who took part.
Last match and we had The infamous Beast from the East and only 9 members fished.
Sweeps won by Rob Allison & Dave Hambley.
Total 236 lb 15 oz, 146 fish.

Sea Angler - February
It was reported Ben Laws came 3rd in Division 1, and gets a £700 Penn voucher,
​also qualifying for the Penn Sea League Final.
Rob Allison came 8th, and receives a £100.00 Penn voucher, sadly he didn't qualify for the final.

March
March and it Rob’s turn to have the month ending honours 12 fish 27 lb 15 oz, with James Moore 7 lb adrift.
Paul Short, Sunday 25th had a ‘clean sweep’ winning HFish & HBoFish as the only member to weigh-in with a single fish
​1 lb 15 oz which obviously was the worst weigh-in of the season.
Rob won both of the months sweeps.
Total 169 lb 10 oz, 92 fish.

Most consistent angler was Brian Harland with 41 weigh-ins.

Thanks to Dave, Bernard & James for their work throughout the season, at the Open & weigh-ins (and of course their banter).

I am not too sure if this is the moment that everyone dreads, or looks forward to, for a laugh at another’s expense.

Oh yes there have been a few classics but one stands out!

​But first, 1st match and Mike Saunders misses the weigh-in.

Stu Swales gets pulled by the police in Filey.

Dave Smith forgot to put the batteries in his head torch.

James Moore struggling with a chest infection, causes Dave Ward to miss the weigh-in.  Dave had 4 fish for 15½ lb.
If you do the math Dave would have finished 4th, and 1 fish shy of the Fish Count trophy.

Andrew Cass had to wade out to retrieve a hung up fish, risking his phone & cigarettes.

Paul Short had to fish under the east pier light as his head torch failed.

Andrew Cass losing a good fish on the east pier (with no name mentioned Bernard Vasey owns up as the 'one' who tried to lift it and told everyone 'not' to use braid, as it cuts into your hands).

Danny losing his rod to strong winds on the aqua pods with just the rod tip bobbing in the surf.

Rob Taylor weighing-in, but not entered.
​
Myself catching a black backed gull (twice).
​A lot of forethought and planning goes into a match.
Conditions, tide, weed, access, egress, tackle and bait.
So picture the scene, all baited up, ready at the waters edge, it’s time, cast in.
All going well, waiting for that bite, until the first retrieve, and something is wrong, your worm drive has failed.
The line is wound up into one messy heap.
Never mind, no worries fit spare reel, and continue, maybe lose 5 mins.
But, and it’s a big butt, quite literally, the reel seat would not budge.
It was a 1 mile trek to the van for tools - hammer, screw driver, and then the return journey.
Re-thread the line through the eyes, clip on a fresh bait and cast out, and relax.
Well for just 20 mins, on retrieval of that 2nd cast, the worm drive seizes, on the spare reel.  #NotAgain
At this point most would probably chuck everything into the sea and call it a day, but no, I was calmly asked
​“Could I borrow your spare reel Peter, please?”
​I will say Good night, tight lines & see you all at the AGM Wed 29th August.
Chairman and President William Atkinson took to the floor and thanked the Officials and presented a few gifts as he has done in years gone by. 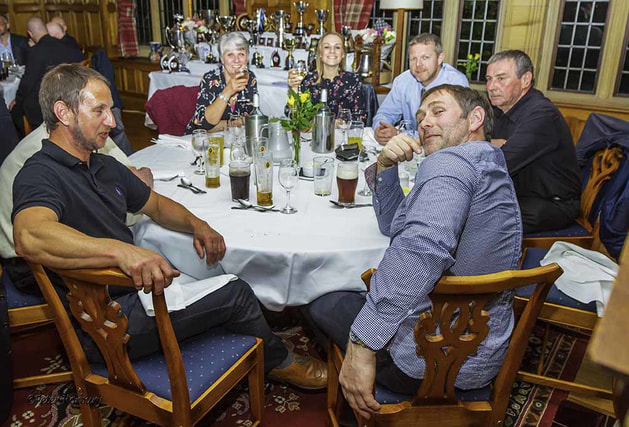 Looking Full!  Dave Turnbull and Rob Allison 'somehow' managed to eat 3 starters, 3 mains and 3 sweets
​between them (with extra cream & ice cream as Rob's wife had sadly been taken ill earlier in the day)
Before everyone disappeared to the bar, Secretary's wife Chris Horbury requested a group photograph,
​and offered to take the photograph.  Members duly obliged. 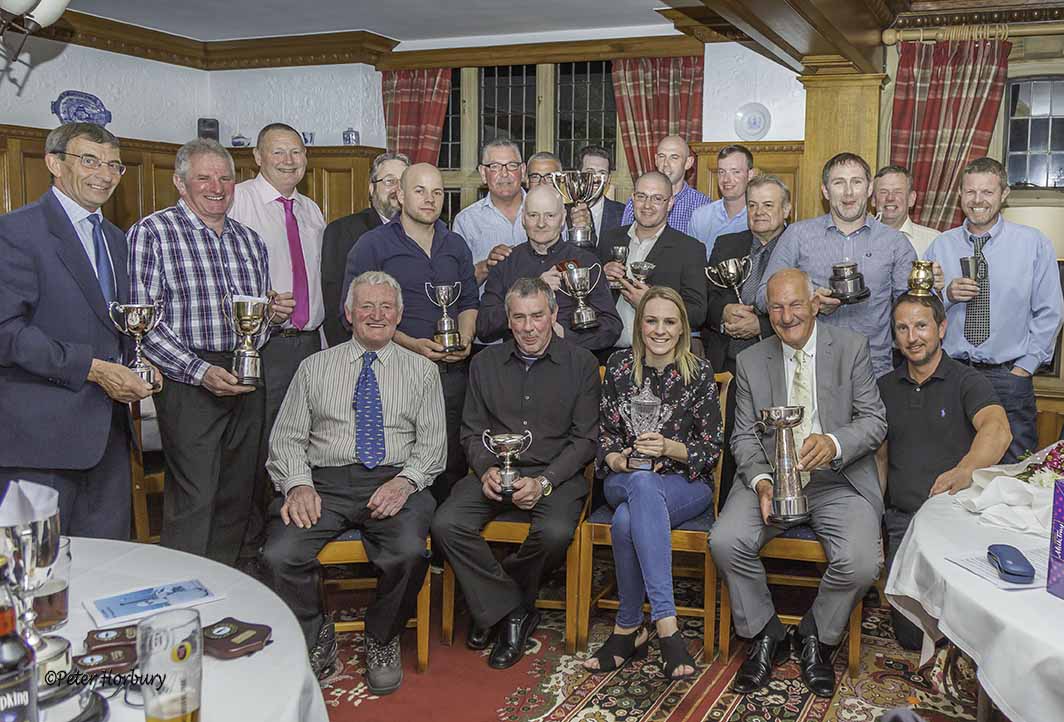 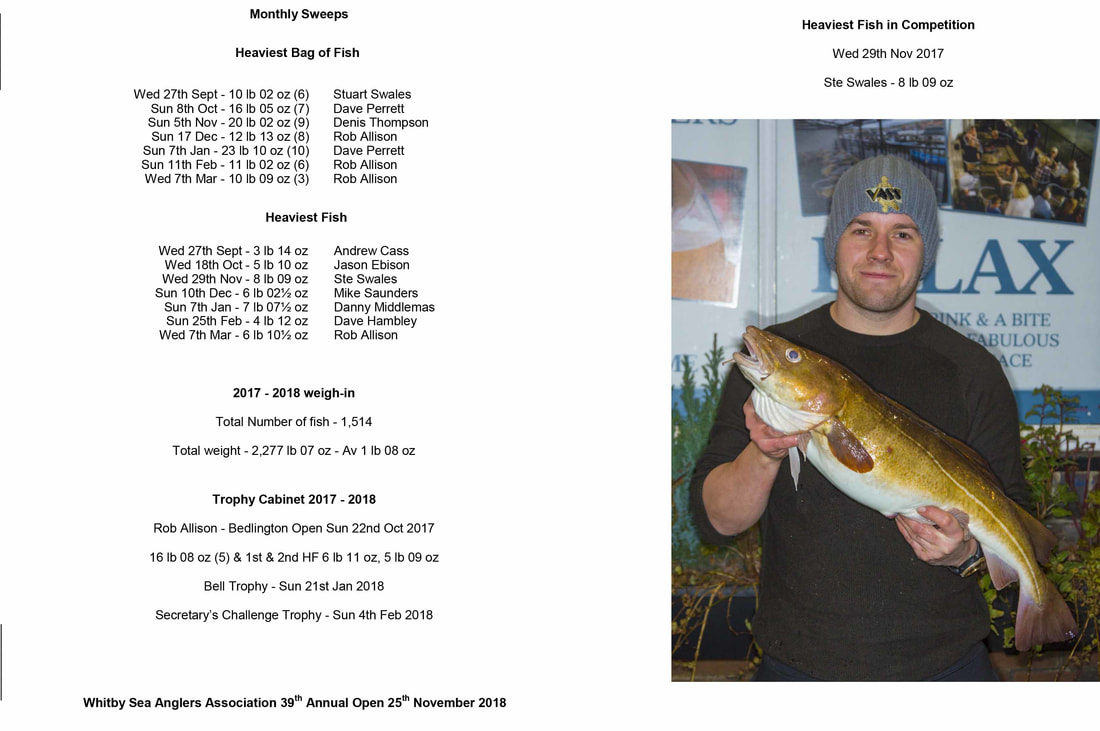 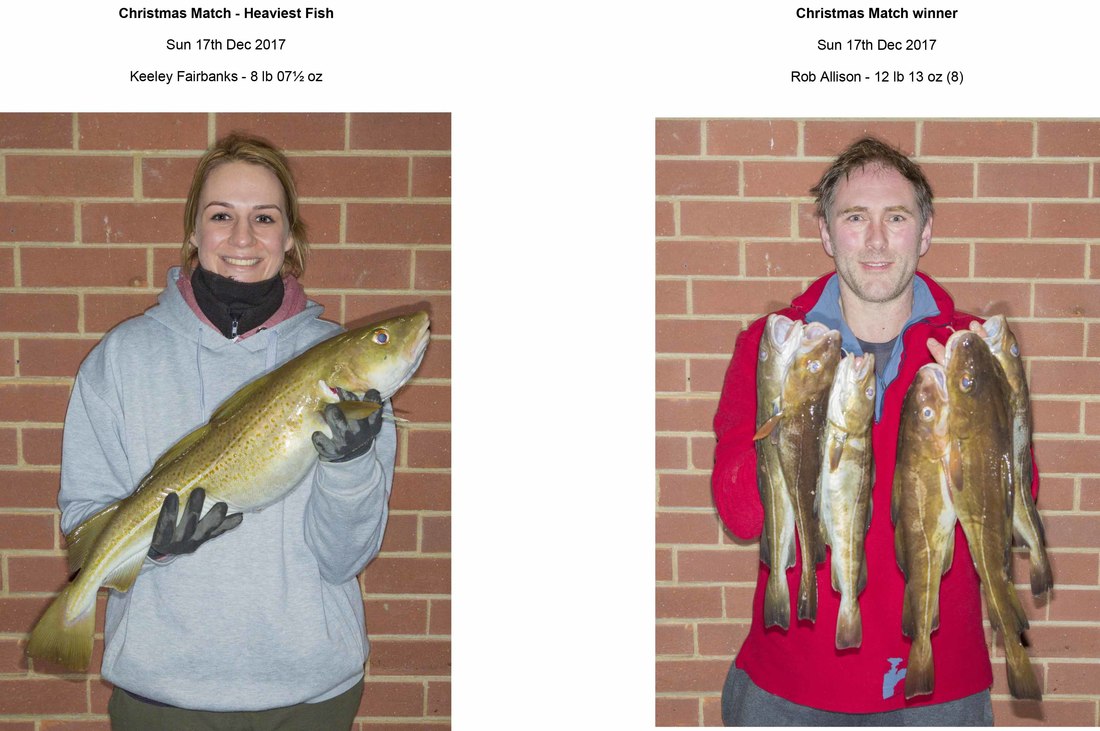 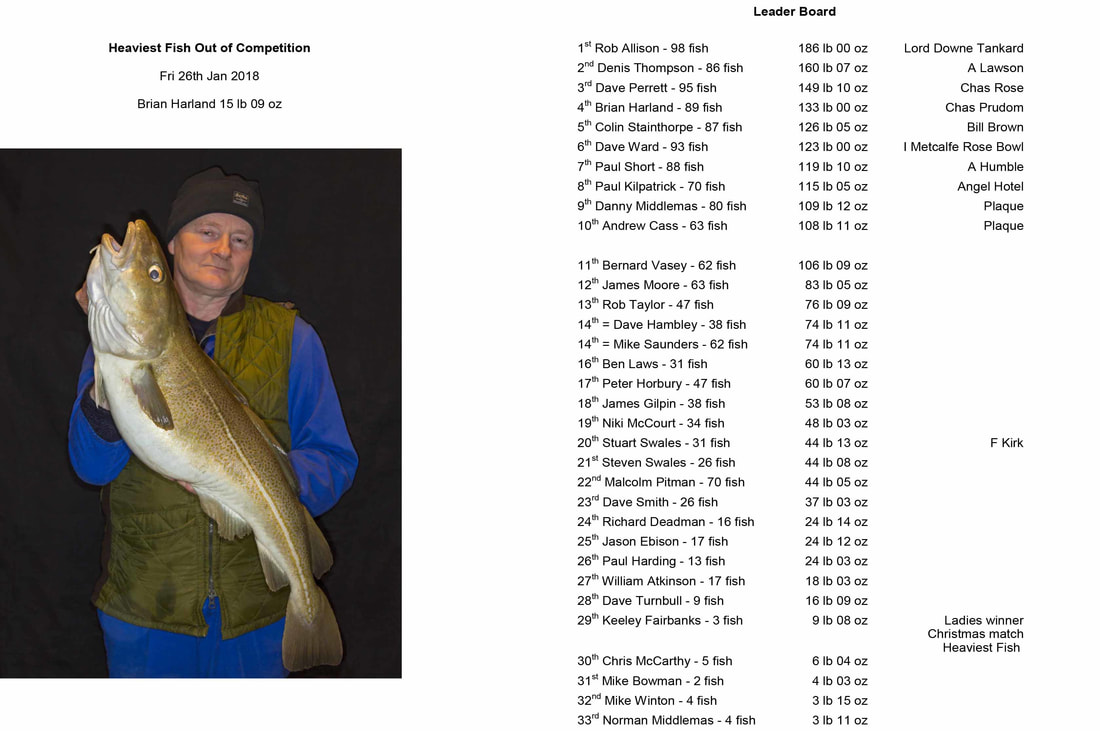 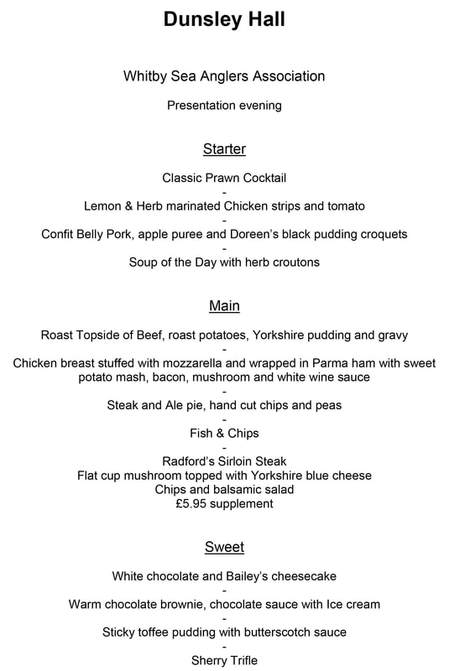