The sea had dropped away from yesterday's 5 metre swells, but with too many shore marks still un-fishable, local anglers fished from Whitby's west pier, in search for that double figure cod lurking in the depths as high water approached at 12.39 hrs 4.2 m.

With temperatures around zero it was surprising how many anglers ventured out.

Unfortunately there were only 2 codling caught (by the same angler), the first around 3 lb and the second was about 1 1/2 lb.  Both of these caught on a bait of squid only, on a pennel rig.

Other fish caught were, one sizable whiting (returned), around 1 1/2 lb and a size billet (returned).  Half a dozen or so well undersized codling were also returned.

From the harbour mouth and north the water was well colured from the muddy water leaving the harbour, but out to sea there was no colour in the easterly swells.

The lack of fish could be explained by the emergence of two large seals (photograph at bottom). 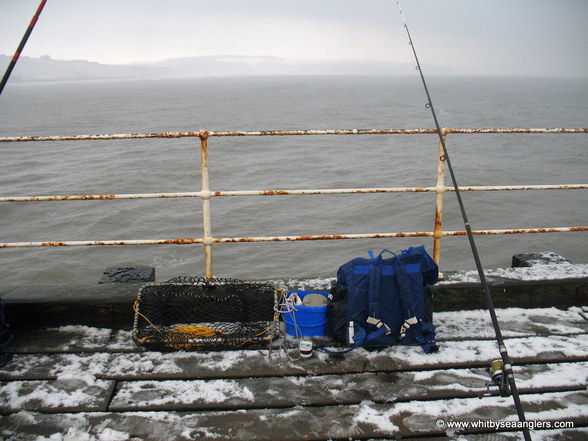 Drop net, Australian pier gaff but no fish on this outing bar a 6" codling or two. Photograph by Peter Horbury. 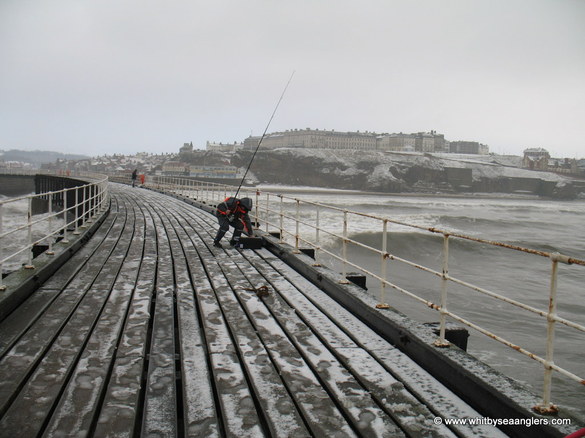 Cold it was as anglers prepare their rigs with a good swell running by. Whitby town in the distance. Photograph by Peter Horbury. 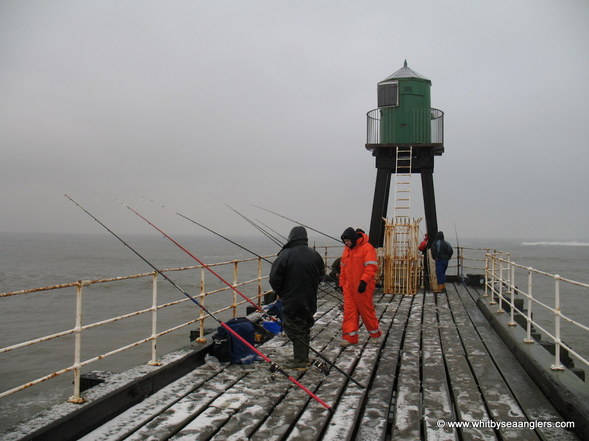 Pleasure fishing, Dave Perrett and Richard Cope. White water can still be seen as the easterly sea is breaking over the rock. Photograph by Peter Horbury.

Well done Rich, yes you have the trophy for the smallest fish of the day (fish returned unharmed). Photograph by Peter Horbury.

White water can still be seen at Sandsend in the distance, as high tide approaches but no bites! Photograph by Peter Horbury.

Casual visitor cleaning up some bait