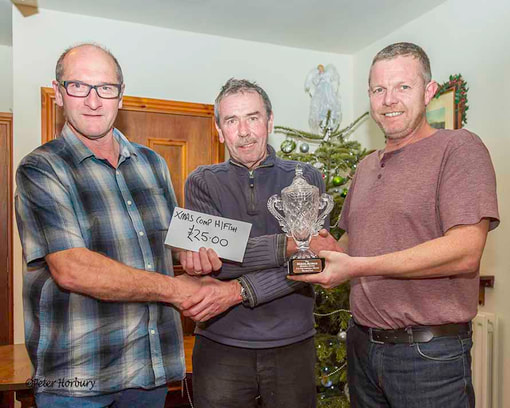 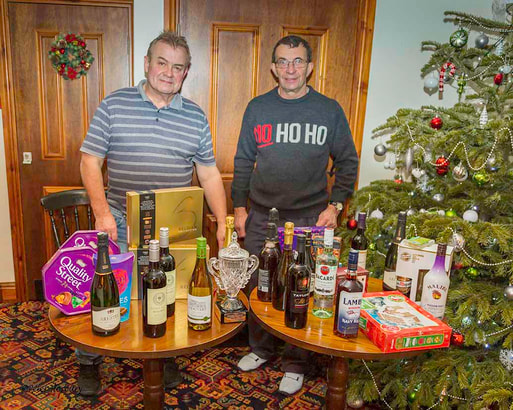 The WSAA Christmas Match Raffle prize table.
Every member received a Christmas cracker, inside which were two raffle tickets, and a scratch card.
After the raffle was drawn Bernard Vasey said a few words & thanked Dave Perrett
​(on behalf of members), for his work putting these together. 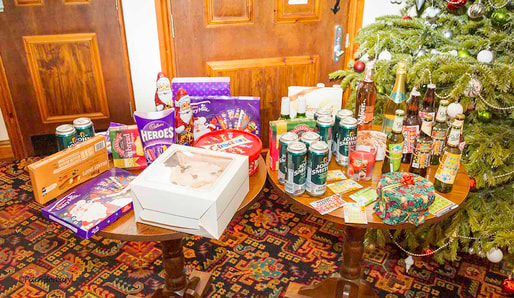 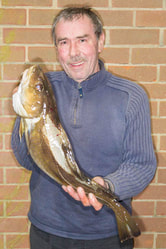 Fishing, 14.00-19.00hrs thirty members of Whitby Sea Anglers competed for the Christmas Match Trophy and the Michael Deadman Memorial Trophy, for the Heaviest Single Fish.  Conditions were far from favourable, in fact it was hard going for all.  After which there was a Christmas diner carvery at The Stakesby Arms, followed by prize giving.

Fishing up and over high water, with a slight NWesterly swell 1ft, plenty of close to shore colour.  The NNWesterly wind was growing in strength throughout the match, it was bitterly cold, and brought numerous short sharp rain showers.  Thankfully the heavy cloud cover shielded the bright full moon.

Many members moved marks during the match trying to find the all-important weigh-in, it paid off for a number of members dropping onto piers, and beaches for whitings and flat fish once darkness had fallen.   {‘No-one’ goes home without a prize in the Christmas match as the names of those who don’t weigh-in, go into a hat, all picking up a prize from the table.}

At the ‘festive’ scales, decorated in tinsel and coloured lights, suitably dressed in Christmas jumper weigh master Bernard Vasey was waiting with Dave Perrett.  Early to the scales Neil Eglon, weighed 1 codling 3 lb 15 oz, he then had a long anxious wait in the hope of picking up HFish.  As members returned with whitings, flounders and dabs it showed just how hard the match had been, but news filtered through that one member had a ‘good fish’.

Sure enough, ‘that’ member Denis Thompson arrived, placed his best codling on the scales 5 lb 02 oz, another codling & a rockling 7 lb 02 oz.  Man of the Match, he had won the Christmas Match Trophy & the Michael Deadman Memorial Trophy for the Heaviest Single Fish.  Denis reported he got the bite at the ‘top of the tide’ but when he played the fish, it was fast solid.  Giving it slack line, placing his rod in the rocks he gave it time & baited up another hook as he patiently waited.  On the second attempt the fish was free, and Rob Allison played ‘gillie’ for him.

Many thanks to Stacey Stevens and her staff at The Stakesby Arms for an excellent evening, and thanks also to Malcolm & Paula Pitman of Hook, Line & Sinker for sponsoring the Christmas match.