Singles Knockout - Bernard Vasey (but William Atkinson is shown on the trophy).

19 members entered and only 5 weighed in.
No mention of Heaviest Fish. 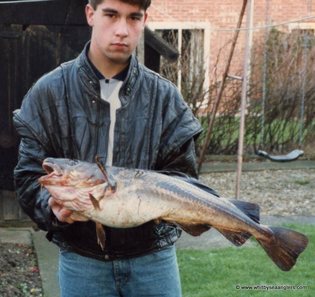 Neil Inglis with his 12 lb 02 oz cod 23rd December 1991.
This 12 lb 02 oz cod was caught by Neil during the Christmas match.  Fishing at Gunie Hole, Robinhoods Bay, from the cliff top (as it was then) this fish was beached but became unhooked and laid on the inaccessible beach for the remainder of the match.  It was not weighed in and was later retrieved by Dave Perrett once the tide had ebbed back far enough to gain access to the beach.