Members, their families and guests were invited to The Stables Restaurant at Cross Butts, Whitby, for the 59th Annual presentation evening.  Time 7.45 for 8.15 pm.

Bernard Vasey announced the winners of the three football / domino cards, and
secretary's wife, Chris Horbury gave the answers to the mini quiz she had organised. 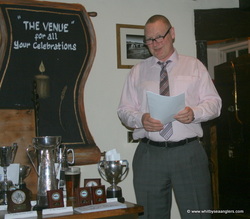 Back in 1973/74 Secretary Dave Johnson, in his hand written notes wrote -
The evenings presentation was the 19th held by WSAA.

If my maths is correct then this makes this evening the 59th Annual presentation.

20th October and the first Royal Marines Association Charity Open and Rob Allison was victorious 10 codlings for 20 lb 15 oz.  Bernard Westgarth had a single fish of 12 lb 14 oz.  I hope this is to be a regular match as I thoroughly enjoyed fishing it myself.

I would like to thank James & Bernard for their attention to detail, recording all fish species and ensuring the weigh-in is run smoothly.  Also to Colin & Rob for raffle sales and Ben for the catering.  Thank you.

Many thanks to all our sponsors and members whom sponsor the Juniors and special prizes during the Open match.

I didn't do so badly, a lowly 38th but with the Heaviest flat fish.

Sunday 15th December and I witnessed a ‘Moonbow’ over Whitby as light rain fell on Whitby and a full moon behind me on Saltwick nab.

Christmas Match - thanks must go to Paula & Malcolm Pitman for sponsoring the event, and a new trophy ‘Help A Capital Child’ - sponsored by Mick Beedle, whose daughters, Abbey & Stacey, were doing a 40 mile trek across the Grand Canyon in February 2014 in aid of Help A Capital Child.  Abbey did not take part in the end as she found out she was pregnant and Beth Sanderson took her place. (Mick is a granddad again)

And members were not sat around idly twiddling their thumbs.

Well done to you both.

All have been recorded into the WSAA Members Trophy Cabinet.

Fishing conditions were good, growing East North East swells of 4-5 ft, the only down side was the low cloud cover bring constant rain & drizzle.

January saw 20 double figure bags for a total of 267 fish for
566 lb 06 oz which was a spike as it was greater than December.

Colin, Rob & Iain continued to jostle with 19 lb between them.

Sunday 2nd February and Matthew returns with a 15 lb bag surpassing Denis Thompson’s record of 1986/87 with 16 matches left - well done Matthew.  On Facebook someone referred to him as the human trawler.

Rob & Iain at one point were separated by 1 oz as they jostled for 5th spot.

Sunday 16th March and as we know Dave is always last to the scales, but on this fateful night they were closed when he returned as an accident on Lyth Bank meant everyone fishing north had to do a detour.

February was dominated by a conveyor belt of low pressure systems and southerly winds some of gale force.

Throughout February Rob & Colin weights crisscrossed with Iain not far behind.

Sunday 2nd March and members had the worst weigh-in of the season 4 fish for 6 lb 13 oz as we were battered by another bitterly cold south easterly.

5th March and a break in the weather as high pressure returns and Matthew passes the 400 lb barrier with 5 LSD’s & 2 codlings for 12 lb 01 oz.

March saw 7 double figure bags for a total of 197 fish for 330 lb 08 oz which was as expected the lowest weigh-in for the season.

We submitted 3 Teams, as last year and got a mention in issue 502 as making a late surge for the top with big numbers fishing.

Matthew Garbutt was listed as 2nd with 55 points, Dave Perrett as 5th with 39 points and Andrew 25th with 30 points in the individuals.

Including February’s results Matthew has 81 points, Dave 54 points and Andrew 36 points - remains to be seen if Matthew wins.  To date we are waiting of the next issue to see how the Clubman finished.

Runners up Colin & Bernard's route to the Doubles Knockout Finals started v Dave & John Wrigley and you could say Colin stuffed the opposition with an individual catch of 23 lb 12 oz.
In the next round v James Gilpin & James Pearce and it was Bernard’s turn to shine with 13 lb 11 oz.

Then we up against the young pretenders of Scott & Iain who both blanked and I caught a 7 oz rockling to take us through to the next round.  As a consolation on that night Iain did find ‘TONY’ a 3 lb 10¾ oz block of jet.  Quids in for Simmo.

Then we were up against the big hitters of Neil & Mick Beedle, who blanked and James & I had 3 lb 03 oz between us.

The final, was fished on the same fateful night as the singles, 8th Jan westerly winds and torrential rain.  Both Colin & Bernard blanked, I had 2 flat fish for 11 oz & James also 2 flat fish for 1 lb 09 oz.

3rd = Mick Beedle, Dave Perrett, Mick Bowman & Andrew Cass
2nd - with 4 votes - Richard Cope
1st - with 10 votes - Iain Simpson
Iain has had a remarkable 2nd season, jostling with Rob & Colin all season.  There is a book of graphs somewhere about and it is also on a new web page - Graphs.  Iain had no less than 7 double figure bags 2 over 20 lb - well done

There were lots of memorable moments from forgetting to take crab flasks, packets of worms, dropped scissors in rock armour, the odd phone lost in the same manner.

Going fishing with 2 halves of different rods was a popular mistake.

Forgetting to pack a re stocked rig wallet.  Not having a fully charged lamp / spare lamp.

Miss judging a wave and getting soaked at the start of a match.

Accessing a mark by one route and unable to find a rope via a different route to get to the weigh-in.

Unclipping a trace + fish, leaving it on a rock, making the next cast and returning to find the fish has gone as a wave had washed it away.

It was decided by the donators of the Trophy that Dave & I pick a winner from 'known' occurrences.

So on 22nd January Colin had a very unfortunate night snapping his rod.  Matthew had some tape in his bag and James fashioned a repair.  Colin continued fishing and as James told me he can not have been casting far but was rewarded with a 6 lb 08 oz codling.  But as James & Colin were landing the fish Colin's rod snapped his rod again.  So ending his nights fishing.

So well done Colin you are the recipient of the Memorable Moment Trophy 2013 - 2014.

After the presentation Hon Chairman William Atkinson
said a few words and made a few presentations of his own. 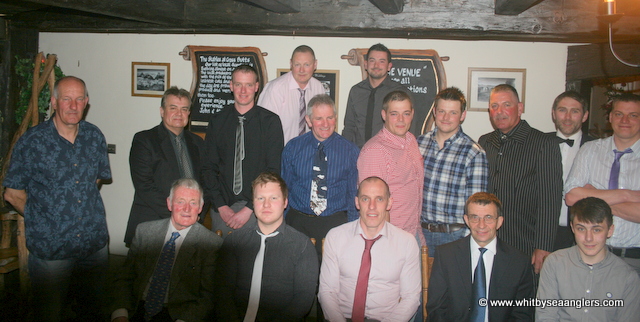 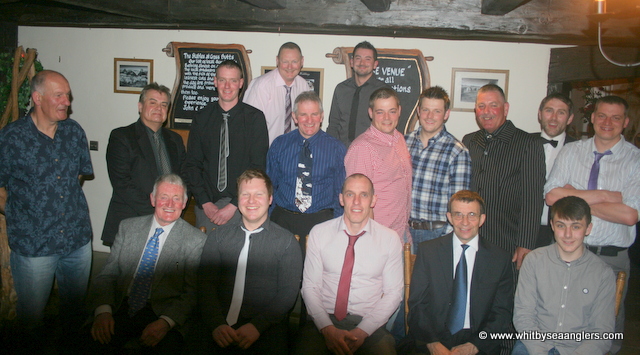