Anglers met at the Oasis Café, Marine Drive Scarborough for registration, a hot drink and some breakfast.  Shortly after 9am all clubs had submitted their teams, and paid their dues.  Anglers were then gathered together for the ringing of the bell, after a brief introduction, and a reminder rocklings were 25cms, as Secretary Peter Atkinson thought anglers ‘would’ need to know, anglers were sent on their way.

Low pressure, Storm Erik was passing over the Norwegian Sea, heading east.  Sea state was flat calm, save some close to shore NNWesterly swell 1ft but building with the following NWesterly wind 15-20mph.  A bright clear day, but chilly if not sheltered from the wind.  Plenty of colour in the water.  Fishing right down and over low water anglers headed to their favourite marks fishing the kelp beds and deep water tidal marks beyond the scaurs.  It was to be a slow day for all.

At the scales Peter Atkinson and George Dunn were not exactly rushed off their feet as only 19 of the 73 returned with 28 fish.

The winner of the Sana bell is the team with the best aggregate weight.  This years winners, and congratulations, Scalby Mills, only their second win, an aggregate of 1 lb 08 oz 03 drms.  Individual clubs had organised their own HBoFish & HFish sweeps for the match, the bell and all the individual winnings were presented by George Dunn.

Many thanks to Scarborough Rocks Social Club for their hospitality and the refreshments laid on for all anglers. 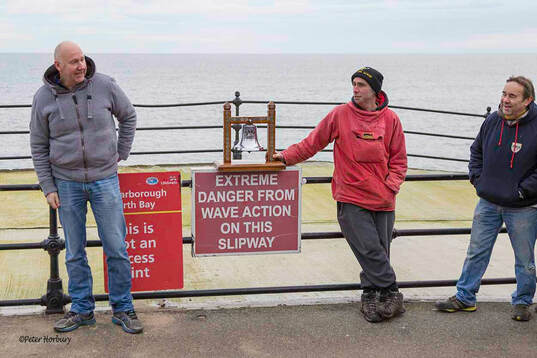 Peter Atkinson, Ian Thompson
Peter Atkinson & Ian Thompson brought the proceedings to order, by ringing the bell.
​Anglers were requested to 'gather round'. As well as reminding everyone of the boundaries, fish sizes, and weigh-in location & times.  Peter made a special reference to 'rockling sizes' feeling that members would nee to know, on a day like today. 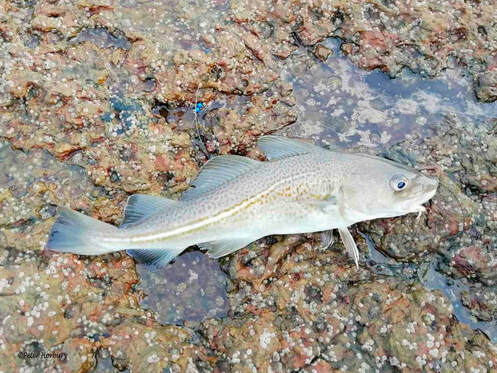 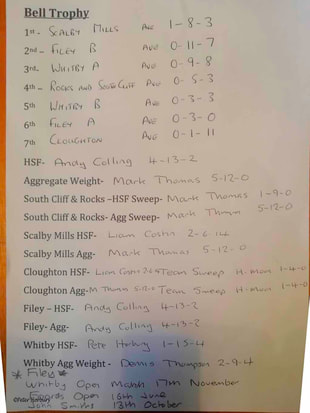