*mentioned in I Russell's season summary at foot of page.

Courtesy of William Atkinson, Chairman of Whitby Sea Anglers Association, from his personal collection of press cuttings. Thanks also to the Sunday Sun. Posted 12/04/2013 PDH.

Members club results.
21 members entered and only 2 weighed in!!

Members club results.
24 members entered and only 9 weighed in.

Members club results.
No other entries as to how members attended. 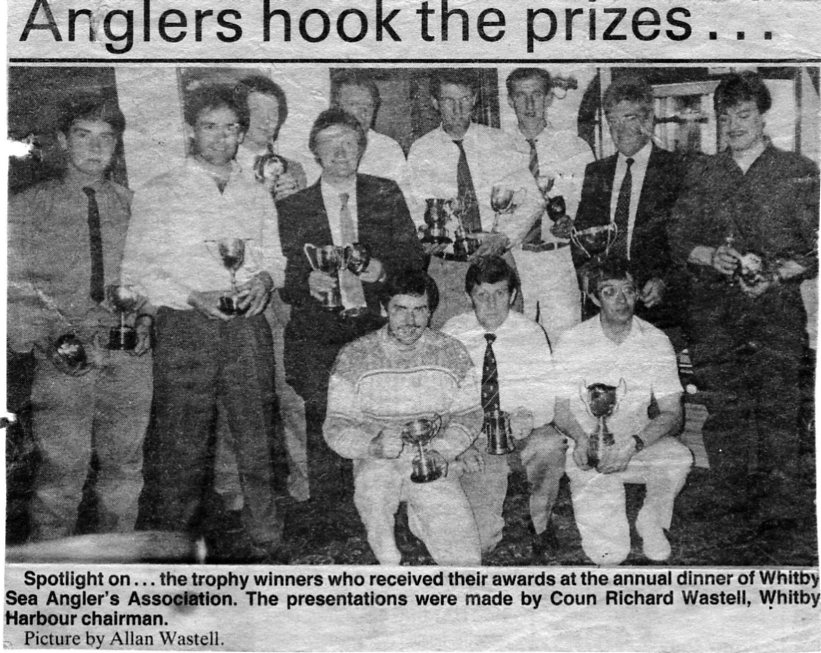 Whitby Sea Anglers Association have just come to the end of another season which started with much promise but tapered away after Christmas when the predominant strong southerly winds produced calm seas which did nit encourage fish to move inshore to feed.

In September club members won five out of the nine shore events and also won numerous other prizes at Scarborough Angling Festival.  Dave Cass won on a Wednesday, the Yorkshire Codling Championship and the heaviest bag of codling throughout the week.  Denis Thompson won on Friday evening match and the Trophy for the greatest weight of fish other than codling but was beaten by just 1 point for the shore angler of the week cup by Ian Russell who also won the Monday and second Saturday events.

Whitby Sea Anglers Association own Blue Star Open competition held in November was won by former club member Keith Thompson who now lives in Northumberland and travelled down on the day just to fish the match.  Club members Denis Thompson and Dave Cass were second and third.

Pete Horbury had a very successful year winning the Bridlington Open and the Cloughton Open heaviest fish matches on consecutive Sundays in December and followed up a month later by winning the Wm. Youngers Open at Scarborough with a 10 lb 08 oz cod.

The Cleveland Potash Open held during Christmas week was won for the third year running by Ian Russell and John Messenger won the heaviest fish sweep in this match with his biggest fish to date a 13 lb cod.

The Whitby Angling Supplies Open in January was won by Roy Cammish of Scarborough and Dave Cass won thee sweep for the heaviest fish with a 6 lb 11 oz cod.

Denis Thompson won the final open match of the season, the Bass Open at Scarborough, with a cod of 4 lb 06 oz.

In the clubs own matches the overall winner was Paul Kilpatrick who caught a total of 202 lb and also won cups for the heaviest bag of fish (28 lb) and the heaviest fish in a club match with a fine 16 lb 12 oz cod.

A number of good cod were landed throughout the season and these included a 14 lb cod which helped win the Christmas competition for Bob Eglon and a 10 lb cod caught by Bernard Vasey to help him beat Paul Kilpatrick in the final of the knockout.

Other double figure fish were a 12 lb cod for Dave Cass, a 13 lb cod for Mike Kilpatrick and a 13 lb cod which won John Messenger the tankard for the heaviest fish outside a club match.

Neil Inglis won the Junior championship, Bob Eglon and Norman Brittain won the doubles knockout and Ian Russell won the Open Fives Trophy and the cup for the greatest number of fish (101).