£500 Wilf Nobles Construction and Plant Hire, Ruswarp
Many thanks to the landlady of the Fleece, Church St, Whitby
Carla Marchment
£200 sponsorship. 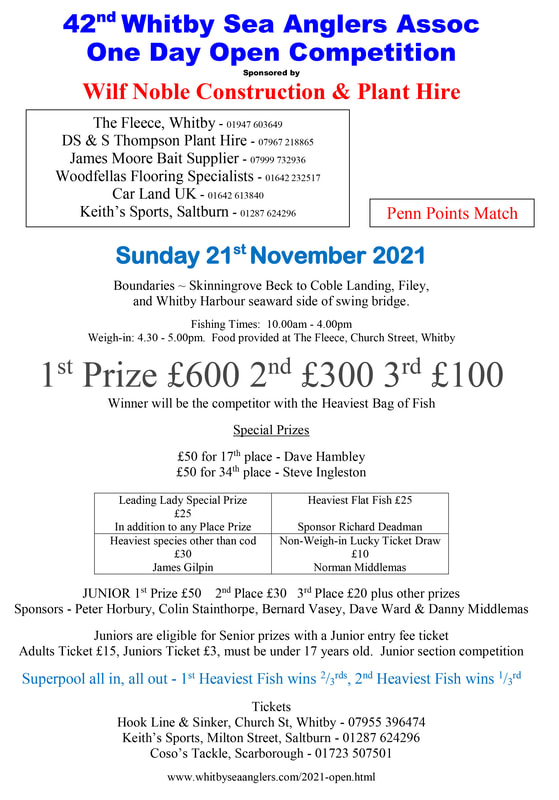 •    Exclusion of Liability - Neither the Club nor its Officials or Committee shall be liable for any damage to property, loss, death or injury caused to any full and temporary Open members arising from their participation in any competitions held by the Club.
•    Insurance - It is recommended that all full & temporary Open members shall insure themselves against damage, loss, death or injury arising from the sport of Angling including their participation in any competition held by the Club.
•    Ticket sales cease at 10.15hrs on the day, and are non-refundable.
•    Please park responsibly, ensure access for landowners & emergency services.
•    No competitor can fish 90 minutes before the start of the match.
•    Competitors can only use one rod for fishing at any time.
•    Assistance may be given to cast out, gaff, lift, or land fish, but only competitors must strike and play fish for themselves.
•    Only two hooks may be used at any one time or one twin point (no treble hooks).
•    Juniors (under 17yrs) can win a Senior prize with a Junior entry fee ticket.
•    Juniors must be accompanied by a parent / guardian.
•    Fish presented at the weigh-in, must be retained ungutted and be available for examination up to 30 minutes after the weigh-in.
•    Unwanted fish to be placed in the bucket provided
& not thrown in the harbour - thank you.
•    The following are not eligible to be weighed-in: Rockling, Rays Bream, and Lumpsuckers.
•    Size limits are: Skate 46cm wing tip to wing tip.  Bass 42cm [max 2], Eels 38cm, Codling, Coalfish, Pollock, Wrasse 35cm, Whiting 30cm, Plaice 27cm, Flat Fish 25cm, Pouting 25cm, If not referred to above, then 25cm.
•    Any objections must be lodged with the officials during the weigh-in, or they will not be entertained.
•    In the event of a dispute then the organisers will adjudicate and have the power to disqualify.
•    Any angler in breach of the rules will be disqualified.
•    Defaced or photocopied tickets will not be accepted by the weigh master.
•    Boundaries ~ Skinningrove Beck to Coble Landing, Filey, and Whitby Harbour seaward side of the swing bridge.
•    Prizes - Due to Covid-19 - 3rd party collection is permitted this year.
•    At 5.00 pm a WSAA committee member will stop any late anglers joining the weigh-in, in the event of a queue.

James Gilpin wanted to donate his outstanding credit, and suggested Heaviest species other than cod - £30

Noted it can also win in the Superpool should it be 2nd Heaviest Fish taken that day.

Dave Perrett informed, Norman Middlemas wanted his credit of £10 to go into the Lucky Ticket draw.

Dave Perret said ‘Anyone going to Coso’s can pick up vouchers.’

Dave Perrett had also spoken to William Atkinson and thought his suggestion of only displaying First place prize on the poster was not a good idea.  With £1,000 in sponsorship, a prize fund of 1st £600, 2nd 300, and 3rd £100 was agreed.

Tickets to remain at £15 despite other clubs charging £20.

Bernard Vasey would be doing the weigh-in, and Jason Ebison confirmed he would also help on his return.

Bernard Vasey was concerned about the prize table set-up.

Dave Perrett & Peter Horbury felt that the ‘new high level’ tables would push together - to be checked next match.

James Moore & Dave Ward consigned to split & fold raffle tickets so as to speed up the prize presentations.

Bernard Vasey confirmed he had already started a raffle prize list.  These would be in his car until after the weigh-in had finished.

All committee members to help with the whole event.

Peter Horbury asked Dave Perrett how many prize envelopes he would need?
Ten to be printed.

Ticket rules also scrutinised, and notes made for alteration.

It was felt that due to Covid-19 3rd party collection of prizes would be permitted this year.

Jason Ebison asked for a committee meeting, seeing how there was five present [minimum req’d].  What was going to happen with the Singles Knockouts in reference to Mike Vickers & Mark Sivils.
Dave Perrett read all the texts on Peter Horbury’s phone and concluded they both forfeit their matches, as not entering the Knockouts in the spirit of the event & good faith.
Jason Ebison thanked him for his oversight, and the committee agreed.