William M. Hodgson. Courtesy of William Atkinson, Chairman of Whitby Sea Anglers Association, from his personal collection of press cuttings. Thanks also to the Whitby Gazette. Posted 18/02/2013 PDH.
The above is mentioned in Secretary Dave Johnson's notes for the 20th Annual Diner and Presentation (Archives 1974/75).

Farmer Mr. M. Hodgson, of Winster House, Sandsend, with the 21 lb 00 1/2 oz cod which he caught on Sandsend beach at ebb tide between 7pm and 830pm on December 30th.  The fish is thought to be a local record for a rod caught cod from the beach in the Whitby area.  Mr. Hodgson was using a 12 foot hollow glass beachcaster rod, multiplier reel 6/0 hook, main line 35 lb breaking strain, trace line 26 lb and lug worm bait.  His cast was about 100 yards out on sandy beach.
The fish was 37 inches long and a girth of 24 1/2 inches.  It took ten minutes to land in heavy swell and surf.  In the same 90 minutes session, Mr Hodgson took another 5 cod, giving him a total weight of 38 lb.
Fishing with Mr. Hodgson were Andrew Marr, Bernard Stebbings and Paul Kilpatrick, who took six fish each.  All four are members of Whitby Sea Anglers Association.
At the same time many cod up to 9 lb in weight being taken on the west pier, Whitby and another mark south of Whitby known locally the "Cretabloc".  This winter was proving the best on record for anglers in the Whitby district, bumper catches from the rocks, piers and beaches.  The baits are lugworm, ragworm and mussel.  Up to 10 cod per rod and tide are common place.
Only a few days ago, a member of Whitby Sea Anglers Association, William Atkinson, caught a cod of 16 lb 06 oz at the "Cretabloc" mark.  A cod of 21 lb was taken by an "unknown visitor"  from a ledge at Saltwick, just south of Whitby. 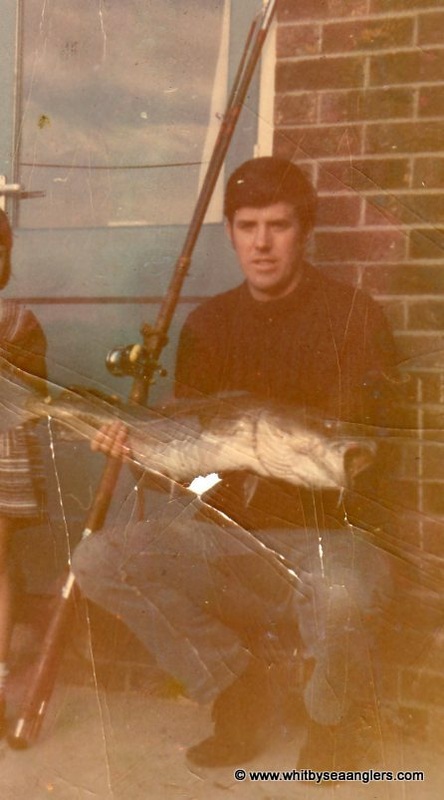 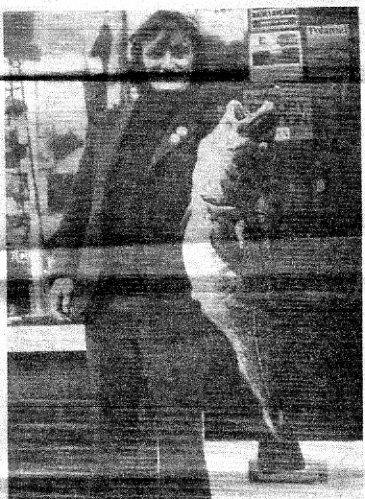 William Atkinson.
Whitby Gazette 15th April 1976 (price 6p).
Mr William Atkinson, of 30 Stakesby Road, Whitby, with his record breaking cod of 18 lb 09 1/2 oz.  It was caught on hermit crab on January 14th from the beach in the vicinity of the Creta Block between the east pier and Saltwick.  The fish is a club record.