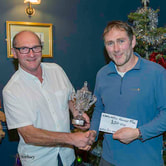 This year there was an extra £50 from Mick Beedle, an un-won Heaviest Flat Fish sponsorship at the clubs Open back in November.  £25 to be added to Heaviest Fish sweep, and £25 for last place.

Fishing form 14.00 - 19.00hrs, a growing N & ESEasterly combined sea state with plenty of colour.  The Westerly wind was not as strong as forecasted but did blow in some heavy cloud cover, with rain by match end 19.00hrs.

Members had an hour to weigh-in at The Stakesby Arms, followed by a Christmas carvery, and presentation, where no-one goes home empty handed.  Bernard Vasey, wearing a Christmas jumper, red Santa hat, had decorated the tripod in festive tinsel to get members in the festive mood.

The winner, for the 6th time, Rob Allison, Liverton Mines, an 18 lb 06½ oz bag of 9 codlings.  He also had the Heaviest Fish 4 lb 14 oz so won The Michael Deadman Memorial Trophy for the Heaviest Fish.  This being the first time Rob has ever won Heaviest Fish in the Christmas match.

In second place, Davey Turnbull, Darlington, a 17 lb 02 oz bag of 7 codlings, inc. 4 lb 11 oz.  Davey, reported dropping two fish off in the surf, can only reflect on ‘what could have been’.

For the members who did not weigh-in, their names were drawn from the winner’s trophy, and had pick of the prize table compiled by Treasurer Dave Perrett.

Members expressed their thanks to Justin Bray, Martin Carrington, landlords at the Stakesby Arms & their staff’s hospitality, especially Michelle Broadley & Caroline Fiddler for the superb carvery.

Merry Christmas, and thanks to all for fishing.

Before the presentation please can we all show our appreciation to the Landlords of the Stakesby Arms Justin Bray & Martin Carrington.  Applause.

Please can you also show your appreciation and thanks to Michelle Broadley and Caroline Fiddler who prepared and served the food.  Applause.

Many thanks from all at Whitby Sea Anglers Assoc.

Moving onto the presentation this is the 7th year the match has been sponsored by Hook, Line & Sinker, many thanks to Malc & Paula Pitman.  Applause.

One change to the norm, Mick Beedle sponsored the Heaviest Flat Fish in our Open match back in November.  That was not won, so he has asked it be used in the Christmas match.  The £50 is to be split, £25 added to the Heaviest Fish sweep & £25 awarded to the last place weigh-in.

The prizes were awarded and photographs taken by Peter Horbury.
After the presentation Dave Perrett re-arranged the prizes on the table.  Before the pick of the prize table draw for those who did not weigh-in Peter Horbury asked everyone to thank the weigh-masters.  Applause.
After all the prizes had been taken Dave perrett & Bernard Vasey set up the raffle prizes on the table, before the draw Peter Horbury asked everyone to show their appreciation for Treasurer Dave Perrett.  Applause.
Merry Christmas & a happy New Year, tight lines, first match in 2020 is Sunday 5th Janaury.
Leader board
Seasons total 1,031 fish for 1,863 lb 06 oz (Av 1 lb 13 oz)
Published Thursday 19th December 2019
Last edit Monday 23rd December 2019