Recreational fisheries, including from shore, in ICES divisions 4b, 4c, 6a, 7a to 7k are limited to catch-and-release only during 01 January to 28 February and 1 December to 31 December 2023.

From 1 March to 30 November, not more than two seabass may be retained per fisherman per day. In recreational fisheries in ICES divisions 8a and 8b, a maximum of two seabass may be retained per recreational fisherman per day throughout the year.
The minimum size of European seabass retained shall be 42 cm.
https://www.gov.uk/government/publications/bass-industry-guidance-2023/bass-fishing-guidance-2023
Fri 16th Sept 2022

I ​read that Cowbar top, Staithes, now has a 'number plate recognition camera'.  With all locals registering their cars, parking offenders will receive fines through the post.
Sat 28th May 2022
With great sadness Carla Smith, landlady of the Fleece, passed away after a long battle with cancer.

Our condolences to her family and friends from all at Whitby Sea Anglers Assoc.

For recreational fisheries, including from shore, in ICES divisions 4b, 4c, 6a, 7a to 7k

Recreational fishers will be limited to catch and release only during January, February and December 2020.

Full detailed guidance will be published once the TAC regulation are published. 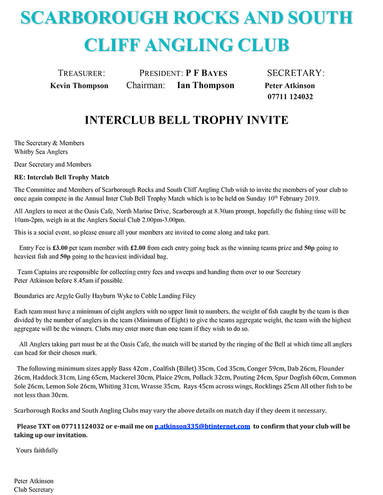 Dates for your diary

Web site past one million views 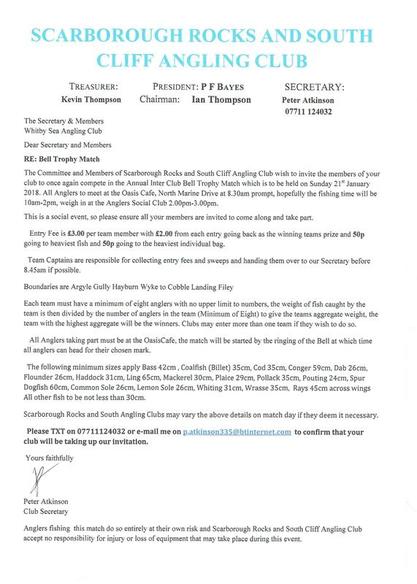 Early contender for Heaviest Fish out of Competition

Anyone else, who cannot make the Bandstand, and has registered their intent to fish the match, can not start fishing until 19.30 hrs.

For those unable to attend AGM and pay their Club dues, please bring £30 in a sealed named envelope, {to be handed to Dave Perrett 'after' the match weigh-in
​[£20 subscription and 5 matches entries @ £2 = £30]

I can now confirm that the new EU sea bass regulations were very recently published and are now in force accross the UK. For recreational fishermen, such as youself and your members this means that mandatory catch and release is now applicable until 1st July, following which a 1 fish per day bag limit applies. 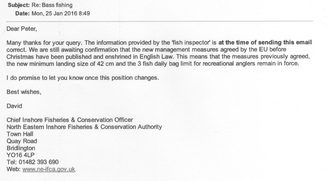 A topic of discussion prior to Bell Trophy registration - Latest Bass restrictions from the EU.

A conversation was recounted by an angler
he'd recently had with a Fisheries Inspector - "it's not yet in English law and the 3 bag limit & 42 cms size is still in place for us recreational anglers".

This morning his prompt reply was waiting for me, and yes we can still catch 3 bass per day.

David McCandless has promised to let me know as & when it comes into force.

​many thanks for your support
Sunday 27th December 2015

​Commiserations to Paul Short who broke the WSAA Record Pollock weight of 4 lb 00 oz (held by James 'King Cod' Gilpin since 30th October 2011) only for it to be beaten on the same night by Denis Thompson 9 lb 00 oz - Congratulations Denis.
Tuesday 20th October 2015 - weathermen to start naming storms.

Many thanks from WSAA to Mr Michael Stonehouse for the bequeathment of £1,000 form his late fathers estate.

£200 is to be spent on a silver plated trophy, and £50 for 16 years will be awarded to the winner, in accordance with instructions received.  The winner will also receive the Sandsend tankard as a keepsake.
Saturday 13th June 2015 - new web page for Summer Matches
Friday 12th June 2015

Gives a different perspective on the match by match leader board.  Shows who excelled in which month.
Wednesday 18th February 2015

Many thanks to Carla Smith, landlady
Friday 13th February 2015

Many thanks to all.
Thursday 9th October 2014

New web site for WSAA past a quarter of a million views last night since launch.

Many thanks to all for your support.
Friday 5th September 2014

Many thanks to all.

Tuesday 2nd September 2014
Many thanks to

Stacey Shelley sent in her thanks, a mini diary and photographs of her 40 mile trek across the Grand Canyon in aid of
Help A Capital Child.
Saturday 15th March 2014

Members will be given a chance to vote over the next few weeks.

Many thanks from everyone.
Saturday 1st Match 2014

Nearly slipped under the radar but on Wednesday 19th February 2014, Colin Stainthorpe caught two whitings for 2 lb 12 oz, the heaviest of which was 1 lb 12 oz.  This is a new WSAA specimen, 43.8% of the British record - well done Colin.

Thoughts and prayers with family of missing angler Nigel Savage.

as tradition has it we follow two weeks later.

Happy New Year to one and all

Landlady of the Fleece, Stormy Coulson rang me this afternoon, sadly due to flood damage the Fleece is closed until further notice, another casualty of the tidal surge in Whitby town centre.

The weigh-in on Sunday evening will take place as normal, thereafter members need to decide where to meet until Fleece re-opens.  Dave is trying to locate another set of scales, but if anyone has a set please bring to weigh-in.

1 - Neither Whitby Sea Anglers Association nor the Committee shall be held responsible for damage, loss or injury by any person in connection with the Open Match.  Many venues within the Open Boundaries are considered to be high risk venues due to access and the nature of their surroundings.  Only anglers who are experienced and familiar with these venues should attempt to fish them and even then the utmost discretion should be used taking into consideration the prevailing conditions.

2 - Whitby Sea Anglers Association and the Committee accept 'No Responsibility' for those wishing to access or fish such venues and strongly recommends that all participating 'Anglers' have 'Club' or 'Personal Liability and Injury Insurance'.

Therefore - WSAA Insurance will no longer be able to cover The Ship Inn Open as from November 2013.
WSAA insurance only covers members whom are named on the policy, as the insurance company have changed their policy.

Dave Perrett (Club Treasurer) has been in touch with match organizer Paul Kilpatrick.
Wednesday 13th November 2013 - Many thanks to
Jefferson Builders Ltd, Stonelea, 1, Dalehouse Bank, Staithes
Saltburn-by-the-sea
Cleveland TS135AN
who have kindly and generously given
£150 for WSAA Open on Sunday
Thursday 6th November 2013 - web site past 110,415 views - many thanks to all.
Tuesday 5th November 2013
1) - Pete Dunn has organised another 'lamp post' match on the evening of 21st November 2013.  Be at the toll house 6pm to register, fishing will start at 6.30 pm, weigh-in by 10.30 pm at the Scarborough Rock anglers social Club.

Web site past 100,00 views this morning, many thanks for your support of Whitby Sea Anglers Association.
2nd October 2013.

Everyone meets at Whitby Bandstand  (bottom of Khyber Pass) at 18.30 hrs for 1st match.

Members who cannot make the Bandstand and are fishing the evenings match cannot start fishing until 19.30 hrs.

Members are asked and reminded to put their subscriptions £30 into a named envelope (made up of £15 subs + £3 insurance + £2 end of season sweep, plus 4 match entries £8 and £2 for Heaviest Fish and Heaviest Bag of Fish monthly sweep for October) to be handed to the Treasurer 'after' the match.

Members wishing to enter the Singles and Doubles knockout competitions can submit their names after the weigh in 2200 - 2230 hrs, at the Fleece on Church Street, Whitby.

Further information and Club Rules can be found at:-

http://www.ukmpas.org/faq.html for Terms and definitions of No Take Zone (NTZ), Marine Protected Area (MPA), Marine Conservation Zone (MCZ) and others.

Marine Conservation Zone
=
Marine Conservation Zones are a new designation tool included in the Marine and Coastal Access Act that can be designated to conserve and/or aid the recovery of: the range of marine biodiversity in our waters; rare or threatened habitats and species; and features of geological or geomorphological interest. MCZs will apply to UK offshore waters, and English and Welsh territorial waters.

The Act provides the tools needed to designate and protect a network of sites - Marine Conservation Zones (MCZs) - which will provide protected areas covering habitats and species which exist in our seas. MCZs will be both large enough, and close enough together, to support functioning communities of marine wildlife. MCZs will be used to protect areas that are important to conserve the diversity of rare, threatened and representative habitats and species [Ref: Marine and Coastal Access Act Policy Statement].

NO TAKE ZONE (NTZ)
=
REMOVAL OF ANY RESOURCE, LIVING OR DEAD IS PROHIBITED

MARINE PROTECTED AREAS (MPA)
=
Any area of intertidal or subtidal terrain, together with its overlaying water and associated fauna, flora, historical and cultural features, which has been reserved by law or other effective means to protect part or all of the enclosed environment

This site is the Official home of 'Whitby Sea Anglers Association'.  The friendly home of club fishing but competitive!

The Secretary aims to have the web site updated by midday, following a WSAA club match.  More archives will be added as time allows, thank you.

However some 'Menu' options have sub menus which can lead to another sub menu, enjoy.

We hope you like our new site and as you can see 'Comments' can be submitted (Menu 2012-2013 Results and Standings), once approved, will be published or you can email WSAA using the Contact Us the form, thank you.

Warning, the Comments Box is a trial and if it is abused, the option will be removed or limited to members only.

All internet links to 'WSAA Open Sponsors' and 'Links' to useful information, open in a separate window for your convenience.

For further information please use the Contact Us form please, thank you.

If you are viewing our web site from another club and wish to inform our members of your Open Match, then please contact the secretary, using the Contact Us form, who will quite happily publish your Open date and any details.

Polite Notice: Any information, names, photos on this site are for viewing only.  Plagiarism will not be tolerated.  Any of the above used for publication or information gathering in what ever form it may take are prohibited.  Anyone wishing to do so must seek permission first.  © all rights reserved.
Published October 2012
Last edit Tuesday 11th August 2015