​Low water (Whitby) 10.58 hrs, 1.2 metres, 1033 mbar, 3°C
​Secretary’s Challenge Trophy WSAA - V - Cloughton Rock Anglers, revived last year, and Cloughton Rocks won.  This year the date & tide picked by WSAA, while Cloughton Rocks hosted at The Red Lion, Cloughton.  All human aspects were organised, and ‘mother nature’ threw in a spanner, the weather, most foul.  The boundaries had to be opened up for safety reasons, Runswick Bay Lifeboat slipway to Coble Landing, Filey, giving all a chance to fish a mark/marks they knew.

Fishing 10.00 - 16.00hrs, giving an hour of ebb, 5hrs flood, the hardest part was finding not only a sheltered mark, but a fishable one, with some moving & travelling mid match as the flood pushed them back.  All anglers were instructed to return to the weigh-in, catch or not, so they could be counted as safely home, participating in the hospitality of their hosts, at The Red Lion.

Catch forecasts were low, but conditions the same for all.  Strong Easterly winds, 29-36mph, whipped up an Easterly sea 5 - 8ft, when doubled up, and it did, waves of 12ft+.  Rain, sleet, and skin piercing hail, anglers were well battered.  The tide turned quickly, aided by the strong wind.  Thirty six anglers took part, 21 from Cloughton & 16 from WSAA.  The team with the best aggregate would win the trophy.
↑ - Paul Short & I (Peter Horbury) were fishing Saltwick Bay - I managed a 6" codling - ↑ 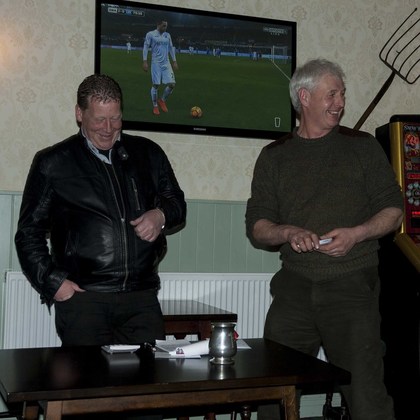 Many thanks to the landlord & landlady of The Red Lion, Cloughton, Dave & Wendy Kemp for the hot food & sandwiches much appreciated after a cold wet 6hrs fishing.

And of course many thanks, from both Peter Halder & myself, for all who took part and made this friendly competition a success.
Heaviest Bag of Fish
Heaviest Fish
Rob Allison has regained 4th place on the Leader Board from Ben Laws.
Published Monday 13th Feb 2017
​Last edit Tuesday 6th Feb 2018