Being 2021, gives an indication that Whitby Sea Anglers Association is at least 97 years old.
This trophy is awarded to the winner of the Station Inn nee Ship Inn Open (Heaviest Single Cod).
​London Hallmark 1923.

Donated by Richard Deadman in memory of his father in 2016

The Lawson Trophy (Lawson's electrical St Annes-Stain), Presented in 1966 and first won in 1988.  Birmingham HM (1965 hallmark).  On the reverse side it is engraved with 'Whitby Sea Anglers'.
* not engraved.

Chas Rose & Co Ltd Malton.  Quality Silver Plate by Walker & Hall Sheffield
Cross referencing this Trophy is throwing up some surprises.  Some years it was awarded for 1st place, 3rd place, then 2nd place and then reverting back to 3rd place.

The Arthur Humble Trophy for 7th place. Photograph by Peter Horbury 21/03/2013.
Silver plated on copper - Fisherman on black plinth.  A Humble sports shop, Bridge Street, Whitby.  Not known when donated but in early days it was not engraved.
*not engraved. 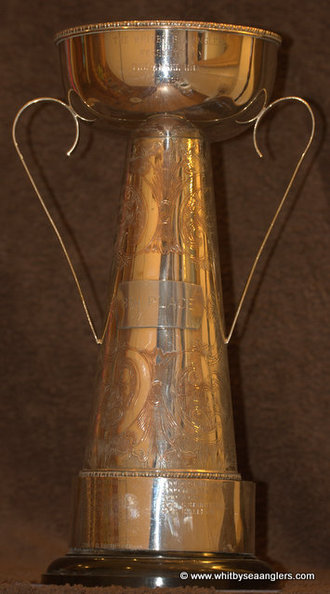 The Frank Kirk Trophy HM silver Sheffield 1956, for the Heaviest Fish in club match.  First donated by him in 1956, Frank was a qualified Horologist (maker of clocks and watches), from Barnsley, came to Whitby and opened a shop on Baxtergate (in the '50's), then moved to Flowergate (in the '60's).  Dave Perrett (WSAA member) worked for in from 1974 until Frank retired in 1985.
* not engraved.
** William Atkinson 11 lb 10 oz - not engraved but information gained from club ledger 31/07/2013 PDH.

﻿Heav﻿iest Fish
Out of Competition

As announced at the AGM 2nd September 2015 by George Middlemas.
George had been approached by Michael Stonehouse, informing George that his father, David "Sten" Stonehouse (a past member of WSAA) had sadly recently past away.  David "Sten" Stonehouse was from Fylingthorpe and used to fish with Ron Wood and Charles Prudom back in the 60’s.  Michael was to receive £1,000 from his late fathers estate but wished to give it to WSAA to be used as a memorial competition/event and would pay for a trophy from this and then fund the remainder as a prize over a number of years.  The club could decide how to continue its sponsorship as the members see fit i.e.  £100 for 8yrs or as Rich Cope suggested £50 for 16yrs.

WSAA have decided £50 for 16yrs, thereafter WSAA will continue.

Members were extremely grateful for this bequeathment, and Club Secretary asked for a contact address so the family could be thanked by the Club and kept up to date with how David "Sten" Stonehouse would be remembered by WSAA.

Members discussed many options but it was suggested that seeing how there isn’t a dedicated trophy for the ‘Heaviest Fish out of a Match’ this would be fitting.  (Speaking to Dave Perrett afterwards he saw no reason why the Sandsend Tankard cannot still be awarded as a keepsake.)

Therefore to be remembered as the David "Sten" Stonehouse memorial Sandsend trophy.  Members will receive £50 from this bequeathment, and the Sandsend Tankard as a keepsake.
Friday 9th October 2015 - Dave Perrett and I (Peter Horbury) visited Mike Stonehouse to show him the David ‘Sten’ Stonehouse Memorial Cup.  Mike has very generously sponsored the cup in memory of his late father.  David ‘Sten’ Stonehouse, born in Baxtergate, started as an apprentice mechanic at Walkers Garage (now the Sorting Office), before owning ‘Thorough Bred Cars’ with John Prudom, his fishing partner in the 60’s. The trophy will be awarded to the recipient of the Heaviest Fish caught out of Competition.  Many thanks from all at WSAA.

This is actually a pewter tankard and was first donated / sponsored* by John Metcalfe in the 1978 - 1979 Season.

Recorded in the Presentation night report for the Whitby Gazette, the first recipient was
Dave Perrett with a fish of 7 lb 06 oz.

*John Metcalfe paid for a new tankard every year which each recipient kept and Whitby Sea Anglers Association has kept this going since.  Dave Perrett is looking for the original and hopefully a photograph of the original will shortly be available. 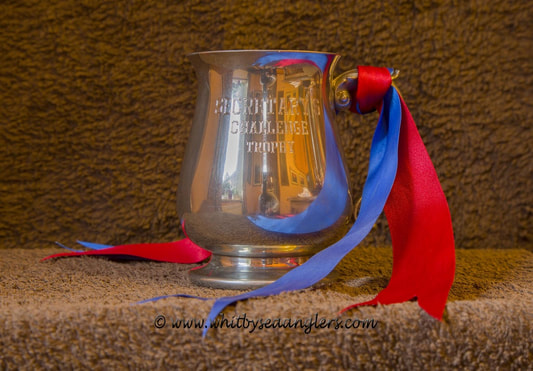 The Harry Whorlton Cup first given to Whitby Sea Anglers Association in 1968.  Revealed in press cuttings from Whitby Gazette.  Archives of 1968 - New Trophy.
"The Chairman, whose wife presented Mrs. Gillian Swales with a box of chocolates announced a new trophy had been given to the Association by Councillor Harry Whorlton for the smallest aggregate weight by a member in the winter competitions." 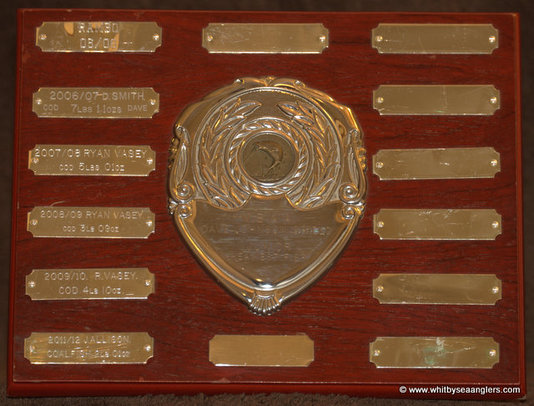