Sandsend beach at 12.39 hrs - there is a pot of gold there for someone. 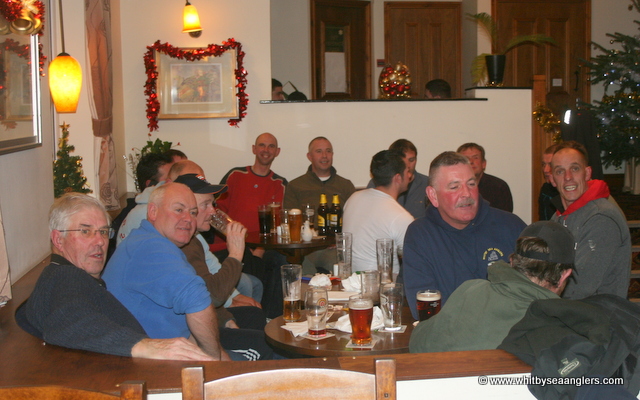 26 members fished the 5 hr match from 2 pm - 7pm with the weigh-in closing at 8pm at The Stakesby Arms, Whitby.  After which members enjoyed a hot & welcome carvery provided by Stacey Stevens and her staff, many thanks from Whitby Sea Anglers Association.

Conditions were far from favourable as the south south westerly winds of late have not abated, bringing rain, hail and decreasing temperatures close to freezing.  1003 mm Hg on the barometer with a slight north easterly swell (1 ft), which increased as the flood took a hold.  Water colour was thick, 18 members returned to the scales with an assorted catch of 19 codlings, 15 whitings, 11 flat fish, 3 billets and 3 rocklings.

Man of the match, with his first win of the season, Andrew Cass - 3 fish for 7 lb 11 oz.  Andrew was presented the winners trophy by Chairman William Atkinson.  Andrew also received a new trophy - ‘Help A Capital Child’ - sponsored by Mick Beedle, whose daughters, Abbey & Stacey, are doing a 40 mile trek across the Grand Canyon in February 2014 in aid of Help A Capital Child.

For those who did not weigh-in, as no one goes home empty handed, there was ‘the pick’ of the prize table, drawn by raffle, many thanks to Dave Perrett, WSAA Treasurer, for organizing.

Earlier in the day - by Peter Horbury