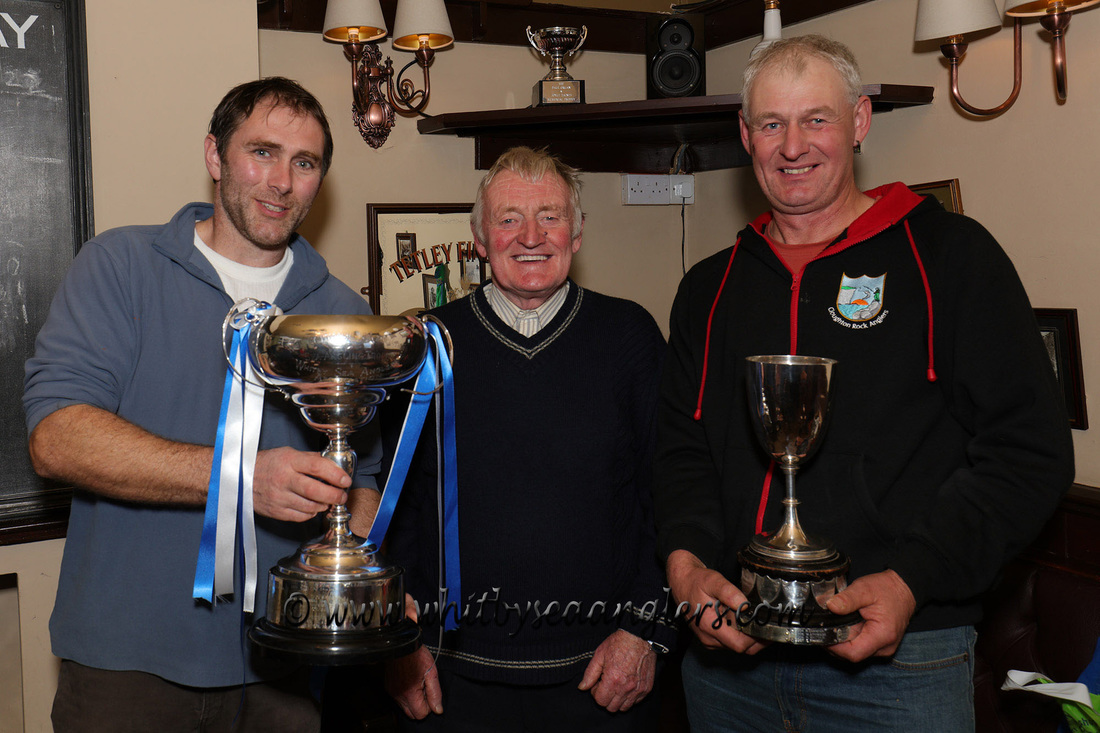 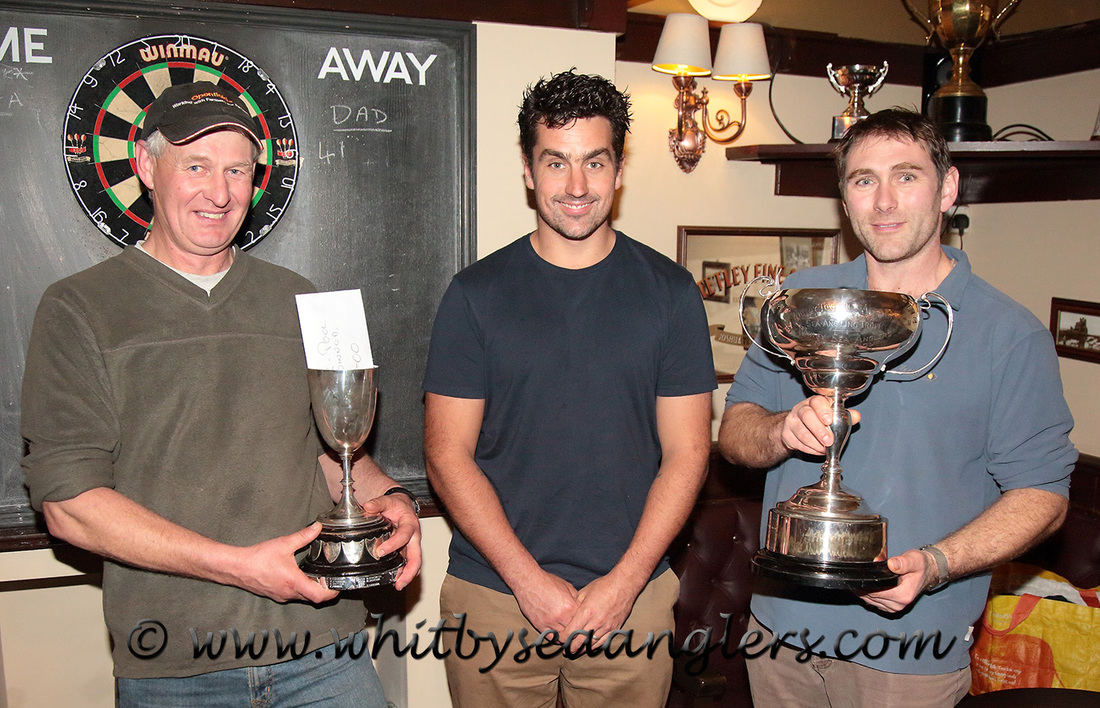 James Noble could not attend the presentation so WSAA President & Chairman William Atkinson stood in to give out the prizes from a well-supported table.  Many thanks to all our sponsors.

Condition were wild to say the least, Abigail (1st British named storm) had just past Scotland and ex hurricane Kate was fast approaching the Irish coast line.  1004 mbar, 15°C (very mild for this time of year) swell was NNWesterly 2ft, water was coloured close to shore due to the recent heavy rainfall.  The wind was the same for all WSWesterly 25mph with gusts of 48mph forecasted.

The match started at 10am and the mornings rain showers had past to reveal bright cloudy skies with some rainfall south of Whitby.  Fishing 2hrs to low water at noon and 4hrs of flood.  The wind aided a good ebb 1.5 metres but as soon as the tide turned it quickly flooded.

In 3rd place Mark Smith, Redcar picked up £200 sponsored by our hosts for the evening, the Fleece, Church St, Whitby.  Many thanks to landlady Carla Smith & Lee Marchment.

In the HFish Superpool sweep Mick Chadwick, Scarborough, again for the 2nd year in a row, won with a cod of 6 lb 14 oz.  Collecting £128, Mick only had the 1 fish and finished 10th overall.  Phil Darby, Guisborough weighed the 2nd Heaviest Fish 6 lb 10 oz picked up £64.

The £50 17th place Special prize, sponsored by Java café’s Ben Laws, would have been won by Grant Greenland but sadly he had left the prize giving early.  Prizes - Strictly No 3rd party collection, as indicated on back of ticket.  Money returned to Ben Laws.

Sponsored by Mick Beedle, Building & Construction (£75) £50 for the Heaviest Flat Fish & £25 for 2nd, there were no flat fish were weighed-in.  The £75 was put on prize table as cash prizes in accordance with Mick’s instructions should there be no winners.

In the ladies section there were no winners and but Paula Pitman did catch a flat fish but an aggressive cormorant stole it for lunch.

In the Lucky Ticket draw, for those you were unfortunate not to weigh-in, John Paul Steyart £10, Gary Hewitt £10 & Paula Pitman £5 raffle tickets.

After the prize giving the table was covered with a large selection of raffle prizes, and James Gilpin presided.

Many thanks to ex WSAA member James Hewitson for the photographs.  Jimmy very kindly gave a bottle of vodka for the raffle.

Last year 102 anglers competed and 29 seniors & 2 juniors weighed-in 91 assorted fish for 198 lb 00 oz, although numbers were slightly down this year it was another resounding, well supported, success with an excellent weigh-in.

Many thanks to James Gilpin & Bernard Vasey for the smooth running of the weigh-in.

Many thanks to all who took part, and we hope to see you all next year.

Peter
PS - Apologies for any miss spelt names, or missing first names or home towns, can only work from information given thank you.

Also on the raffle table were the left over prizes after all those attending had made a selection.  Many thanks.

Thanks to all for attending, hope to see you all next year 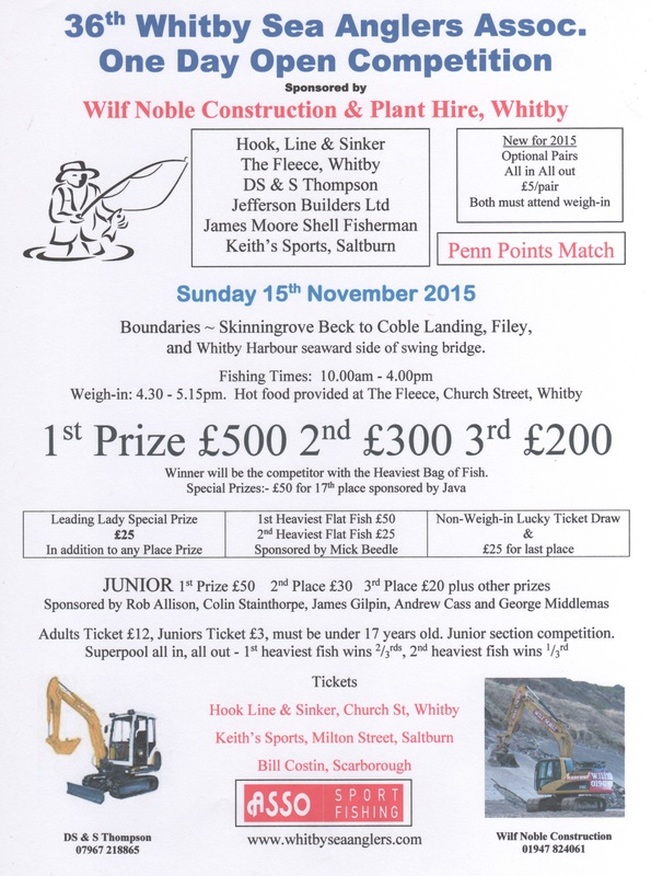 has kindly and generously agreed to sponsor the annual open again.

weigh-in, food and refreshments at the Fleece, Church Street, Whitby

Many thanks to Carla Smith, landlady

•    Exclusion of Liability - Neither the Club nor its Officials or Committee shall be liable for any damage to property, loss, death or injury caused to any full and temporary Open members arising from their participation in any competitions held by the Club.
•    Insurance - It is recommended that all full & temporary Open members shall insure themselves against damage, loss, death or injury arising from the sport of Angling including their participation in any competition held by the Club.
•    Please park responsibly, ensure access for landowners & emergency services.
•    No competitor can fish 90 minutes before the start of the match.
•    Competitors can only use one rod for fishing at any time.
•    Assistance may be given to cast out, gaff, lift, or land fish, but only competitors must strike and play fish for themselves.
•    Only two hooks may be used at any one time or one twin point (no treble hooks).
•    Juniors (under 17yrs) may only win the juniors prize unless they have purchased a senior ticket.
•    Juniors must be accompanied by a parent / guardian.
•    Fish presented at the weigh-in, must be retained ungutted and be available for examination up to 30 minutes after the weigh-in.
•    Unwanted fish to be placed in the bucket provided & not thrown in the harbour - thank you.
•    The following are not eligible to be weighed-in: Rockling, Rays Bream, and lumpsuckers.
•    Size limits are: Codling, Coalfish, Pollock 35cm, Eels 38cm, Bass* 42cm *(max 3 bag limit), Whiting 30cm, Flat Fish 25cm, Pouting 25cm, and Wrasse 35cm.  If not referred to above, then 25cm.
•    Any objections must be lodged with the officials during the weigh-in, or they will not be entertained.
•    In the event of a dispute then the organisers will adjudicate and have the power to disqualify.
•    Any angler in breach of the rules will be disqualified.
•    Defaced or photocopied tickets will not be accepted by the weigh master.
•    Boundaries ~ Skinningrove Beck to Coble Landing, Filey, and Whitby Harbour seaward side of the swing bridge.
•    Prizes - STRICTLY NO 3rd party collection, to be collected in person.
•    At 5.15 pm a WSAA committee member will stop any late anglers joining the weigh-in, in the event of a queue.