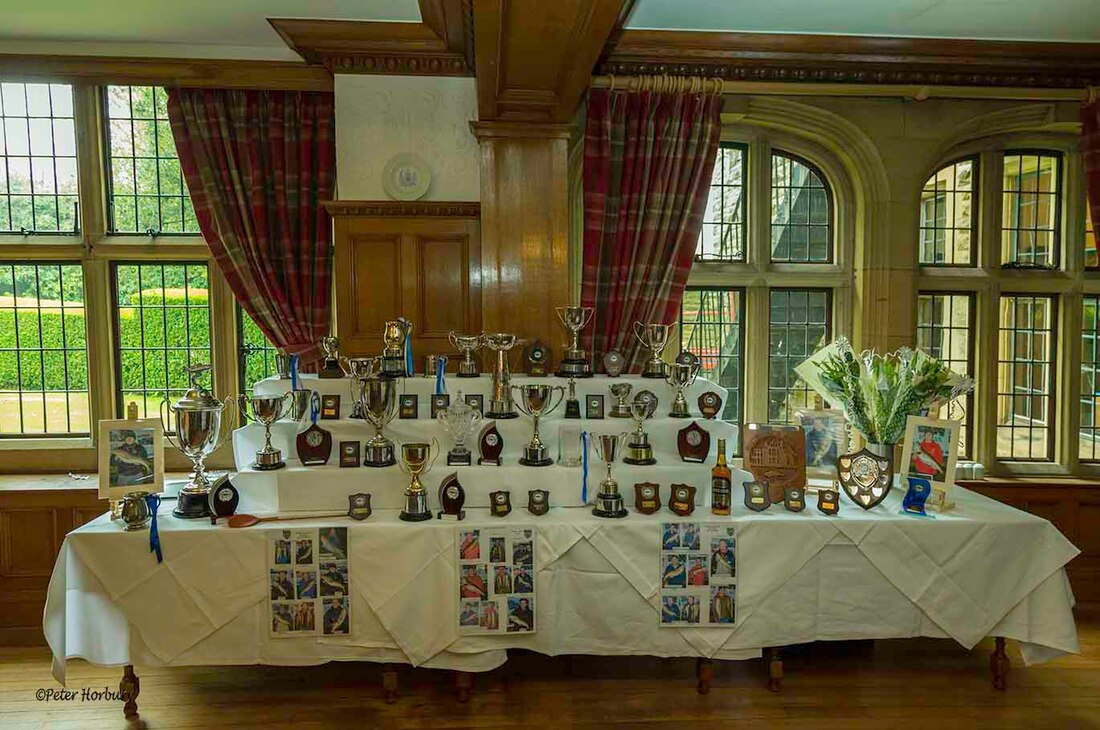 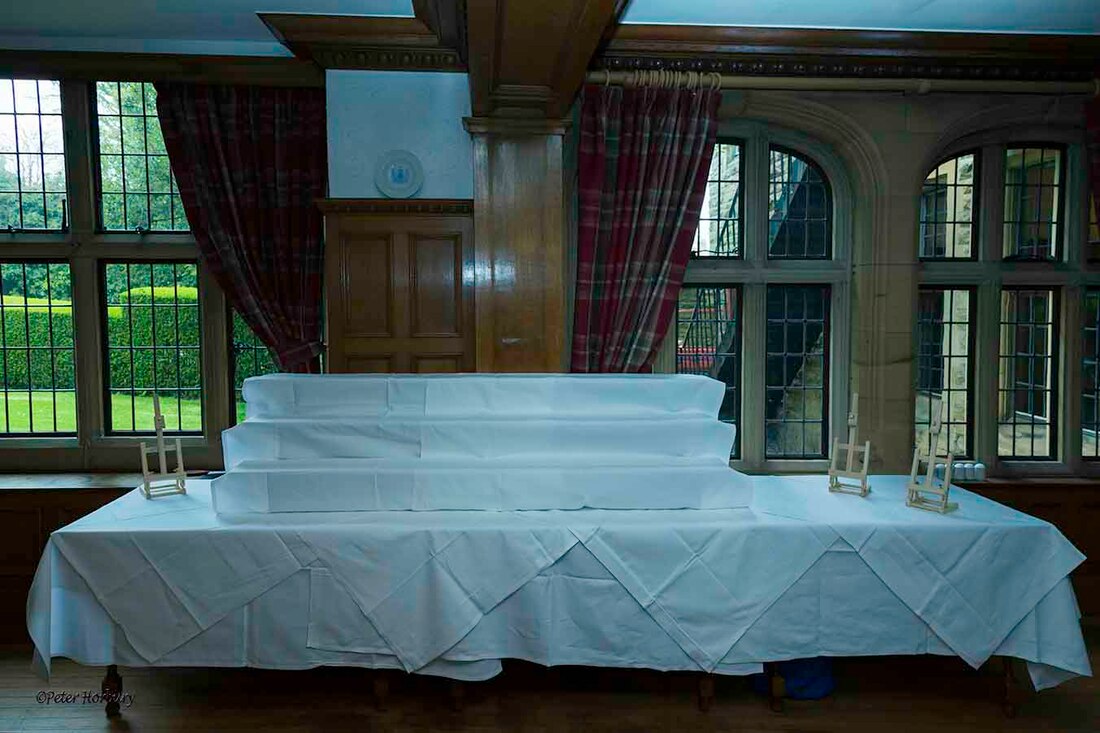 Earlier in the afternoon Bernard Vasey, Dave Perrett & Peter Horbury set up the Trophy table & prizes.
Many thanks to Bernard for building the new trophy stand.
The Oak Room, Dunsley Hall
The dining room all laid out prior to the guests arriving .
There were numerous domino cards, which were drawn later in the evening.

Could we show our appreciation to the staff here at Dunsley Hall. [Applause]

Tonight is our 64th Annual Presentation evening, thank you all for coming and I trust everyone enjoyed their meal.

Last year we thanked 'some' who are often overlooked who themselves make sacrifices for WSAA.

Three ladies suffer, and put up with their husbands commitment to Whitby Sea Anglers who, again should not be overlooked.

Firstly Jackie Perrett, Jacky Vasey and of course to Chris, my very understanding dear wife.  Sorry we did not get away during your weeks holiday, nor to celebrate your 60th.  [Flowers & applause]

To our Chairman William Atkinson, a token of our appreciation.  [Bottle of dark rum & applause]

And again just like last season the majority of matches had 20 or more members fishing, and numbers did not drop off until 2nd Jan when only 13 fished.

Rob nee ‘Tink’ Taylor led the first two matches, then Denis, Paul Short had a run of 9 matches at the top, then Brian maintained a healthy lead throughout.  He was first to the 100 lb Club, and then first to the 200lb club.

The individual fish count kept changing in the closing month of March with Paul Short winning.

Comradery again, as Bernard’s jokes, were at their best throughout, with the weigh-ins well attended but, again as mentioned last year, not so much the social side with many going home after the weigh-ins.  As Dave Perrett will confirm Bernard jokes were surpassed by Davey Turnbull’s excuses as to why he wasn’t fishing.  Pet hamster being circumcised, buggies were tied during frantic sex had us both in stitches, and those are just the printable ones!

Many thanks to Danny Middlemas, as promised, he organised the ‘domino cards’, think I am right in that Brian won more than anyone else.

Start of the season September.

For someone who hates rocklings, it did help Rich 'Deadly Fish' Deadman to his first win Sun 14th, 1 codling, 1 billet & 2 rocklings.

Same week Mad Cows disease was found in Aberdeenshire thankfully nothing came of it.

During the day, Filey Open Davey Turnbull comes 2nd 4 lb 15 oz, Rob Allison 7th overall, and misses out on HBoF by an ounce.

Again, many thanks to all our sponsors. [Applause]

Dave Ward weighed-in the first & only contender for HFish Out of Competition 10 lb 01 oz on Monday 10th, also a Personal Best for him - well done.

Christmas match and back up to the Stakesby Arms where we were well looked after by Tracey & her staff, Denis Thompson won but Rob Allison forgot to return the trophy, hence no photograph on the night.

Congratulations to Rob Allison winning the Station Inn Open & picked up the Whitby Gazette ’24 Trophy and £1,000

Sweeps went to Rob 'Tink' & to Denis by de-fault as Allan Beale was not entered.

Sun 24th Secretary’s Challenge Trophy, many thanks to all those who took part.

The Excel spreadsheet I had written to handle Pounds, Ounces & Drams came in very handy as Mark admitted he was not properly organised.

Only Dave Ireland from Cloughton Rocks shared any of the spoils, picking up £33.00 for 2nd HFish 3 lb 04 oz.

Sweeps, both to Danny.

Same night Rich & I had to crawl up Fileybrigg.

Started off well for Rob Allison clearing 10 lb off a 42 lb deficit.

Davey Turnbull always surprises me, well he shouldn’t really but again he decides not to return to the weigh-in when he has fish.  Instead he stays put & doesn’t catch anything else.  Telling me the next morning ‘It was perfect for a piggy’.

Most consistent angler was Danny Middlemas with 45 weigh-ins from 51 matches.

Thanks to Dave, Bernard, James & Jason for their work throughout the season, at the Open & weigh-ins (and of course their banter).

Ladies
Seniors
Sunday League - sponsored by Hook, Line & Sinker, Church St. Whitby
And onto the Leader Board Top Ten.
The recipients of the last two tophies are kept under wraps, by Secretary Peter Horbury - until this moment in the evening.
Memorable moments

I am not too sure if this is the moment that everyone dreads, or looks forward to for a laugh at another’s expense.

Just like last year, and the years before there have been a few classics.

The season did not start well for 3 members with “Freezer Gate” - Colin, Cassy and Rob Taylor all had freezer mishaps losing precious bait.

Sun 30th Sept - There a TV series called “Lost” with an unseen animal tearing through the grass making menacing noises well that was Dave Ward down Goldsborough totally Lost, unable to find the track back up to the cliff top.

Wed 24th Oct - Paul Kilpatrick leaves rod & reel on Sandsend Road, after the match, never to be seen again despite a Facebook appeal.

Sun 28th Oct - Neil Eglon takes on the dreaded weed, and loses, as his rod snaps.
The same night Allan Beale weighs 15 lb 14 oz [4 codlings, 1 whiting] including HFish of the night 5 lb 13½ oz - Only to not be paid-in.
Doing the math his total weight would have been 147 lb 03 oz, giving him 7th place, nudging Jamsy to 8th, and ben to 9th.
One Club member has a particular saying - lesson learnt.

Wed 31st Oct Halloween and Bernard is all dressed up, members send their get well wishes to Dave Perrett recovering from having a stent fitted.

Sun 4th Nov - Rob Allison gets the blame for Dave Hambley leaving his thawing bait to continue thawing on the warmer all match, rushing him out of the house when he had planned to go it alone.

Wed 14th Nov - Danny watches in horror as his cod plays pinball - bouncing from rock to rock, never to be seen again on the aqua pods.

Wed 21st Nov - “The Handbrake” Rich’s handbrake fails, and his van rolls 50yds down Runswick Bay slipway.  Thankfully there was some opposite lock, and it came to rest at the life ring post.

Wed 5th Dec - With reports of cod in abundance the Fish Chasers were out & about.

Christmas match and Rob Allison forgets to bring the trophy to the presentation.

There are a number of essentials for fishing, all need to be loaded into the car.

Having driven some miles on main roads, then country lanes, then dirt tracks.

This unfortunate member parked up and started to get his waders on, bag out of the car, coat on, suddenly realised he had no fishing rod!

On the way to the back to the weigh-in, he admitted to me he had to free wheel down every hill as he had no petrol, the car was running on fumes.

Congratulations to Rob 'Tink' Taylor who kept calm & collected throughout for ‘that’ memorable moment at Staintondale.
Bernard also handed out 3 mounted photographs, supplied by Peter Horbury, to Brian Harland, Rob 'Tink' Taylor & himself.
The Finale - Honorary President & Chaiman William Atkinson took to the floor.
He rounded off by presenting James Gilpin, Dave Perrett & Peter Horbury with bottle gifts for their work in ensuring the smooth running of WSAA. [Applause for all]

Peter Horbury
PS and then we forgot to do a group photograph!
Presentation pamphlet 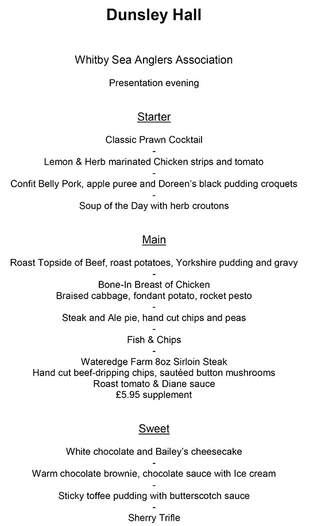